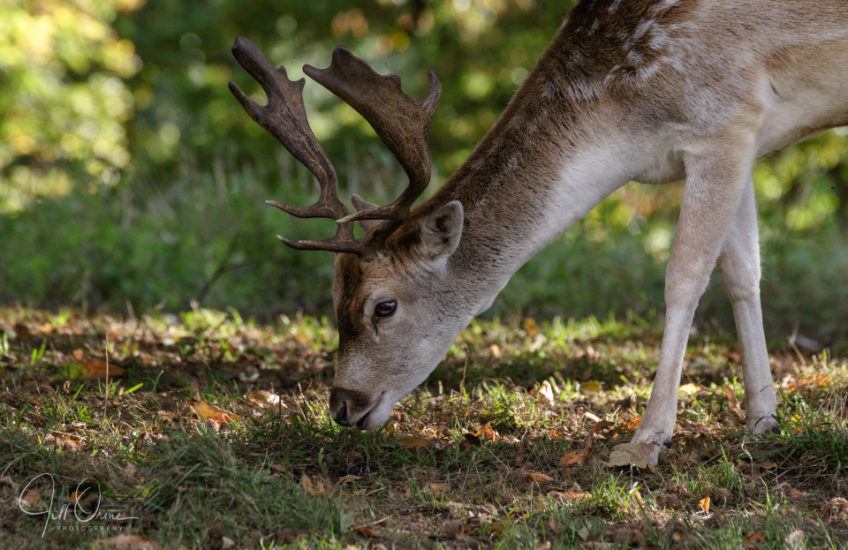 After spending the morning on useful things, I zoomed over to Charlecote in the middle of the afternoon to check on the rut. It’s only just getting under way here, but some of the bigger bucks were already stamping around bellowing, and trying to collect their harems. Most of the does looked completely unimpressed, and the fawns and juveniles were all very wary and trying to stay as far clear of the big guys as possible.

I’ve struggled to decide which of the day’s shots to post; I almost gave the nod to this one, of a fully-grown buck which for some reason was trying to stay out of the way of the others as well. I originally spotted him hiding behind a heap of cut logs, and even though I tried to tiptoe past in a very unthreatening way he was very spooked and got to his feet, peering out at me from behind a tree. He didn’t seem to be injured, but I wonder if he’s been so bested by one of the others that his confidence has gone and he’s trying not to draw any more attention to himself. I’ll look for him again on my next visit.

On my way back to the car park I came across a small group of deer under the trees at the side of the drive – all males, of various ages including full-grown bucks, but all very calm and quiet, and not looking as though they wanted to be involved with the pawing of the ground and groaning that was going on on the other side of the house. I really liked the play of light in this shot, but in the end I couldn’t resist this close-up of the same young adult, who looks rather as though he’s dipped his nose in a bowl of melted chocolate.

Tonight R came back from his evening walk and gave me the news that whatever else might be roaming the garden at night, at least some of the cat kibble we’re putting out is being eaten by a big fat hedgehog. I’m absolutely delighted!