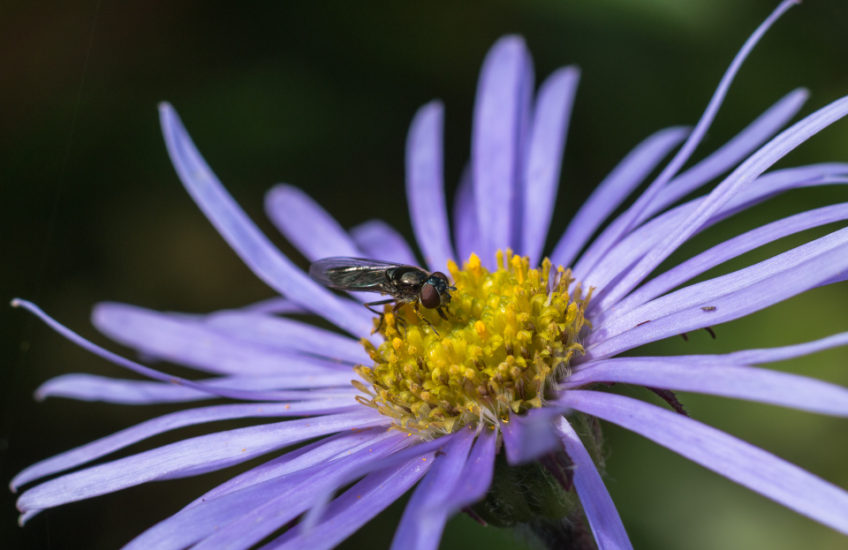 With bonus hoverfly – not that you’re surprised by that. Don’t quote me, but I think she might be Platycheirus albimanus, the white-footed hoverfly.

I’ve been stuck at home again today, acting as the interface between R, who was elsewhere on some kind of work-related excuse, and the builders. So, as you’d expect, there was lots of tea and coffee, and on this occasion quite a lot of Radio 2. I wasn’t trying to listen to their conversation – quite the reverse, in fact – but with one of them working up in the roof and the other not, voices were raised and did carry through the house to me. Football was discussed, and music – and rather less expectedly, fossil-collecting on the Jurassic coast of Dorset.

I was pretty bored by my confinement to barracks, so I made some damson gin. And then I went on line and bought a jumper. By now alarm bells were ringing in my head – my normal habit is to buy a piece of clothing, wear it until it falls to pieces and then buy another. And I have a perfectly serviceable jumper. Therefore the purchase of a rather expensive new one was clearly a cry for help.

I ate some chocolate. It didn’t improve the situation. Then I tried cheese, but that didn’t make me feel much better either.

Photography was clearly the answer. I thought of asking the builders if I could take their portraits, but bottled out. Therefore it was going to have to be another garden shot, but I decided that today I’d go for an arty selective-focus flower photo, with no insects.

Then I spotted a hoverfly…. and another….. and 184 shots later I thought it was probably time to call it a day and see if I had anything worth posting.

I have a whole sequence of shots of this little female on the aster. She had to dip quite a long way forwards into the florets to feed, which of course resulted in her becoming covered in pollen. So every couple of minutes she would stop and clean herself off, and then she’d go back to feeding – and so the cycle would repeat. Even without being able to enlarge the image I think you’ll be able to see some of the pollen that’s stuck to her.

I decided to post this image because if you ignore the hoverfly it’s the shot I thought I was going to take today. But I’ve also put in R’s favourite as an extra – he likes the fact that you’re looking straight down on the flower there. 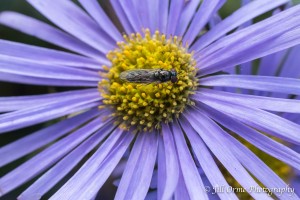 The builders will be back at 8am tomorrow, so I’d better go and get some sleep. I need to try to find a displacement activity that doesn’t involve eating the contents of the fridge, spending money on line, or creating several hours-worth of editing for myself. Should you have a reasonable suggestion as to how I can keep myself out of mischief, please do drop me a postcard!