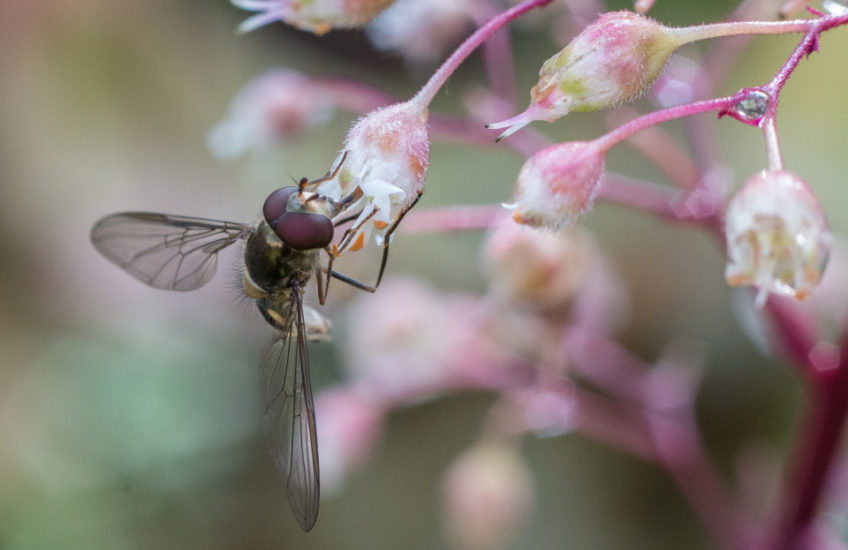 Well, it is Tiny Tuesday – what more excuse do I need!

I had a good run this morning, actually. I got a drop that didn’t drip on a freshly-opened lily bloom, and a minute green fly on a pink echinacea petal – and then I thought it might be worth going and taking a look at Heuchera ‘Marmalade’ to see if there was any insect activity around it, and found plenty. I saw four different types of hoverfly, but though I took over a hundred shots in total I only managed clear images of three of them.

Though we all know by now that my insect identification skills aren’t all that, I think this might be Meliscaeva auricollis – I got several photos of him, including one one slightly blurry one of him in flight which shows his shape and abdominal markings, and a couple of reasonable shots of his face, and I can’t find any species that look closer. (I wanted to join the UK Hoverfly group on Facebook to get the ID checked, but they’re so inundated with posters at the moment that they’re not accepting any more new members for the next six weeks!) I especially liked this shot because of the clarity of the wings and the detail in his tongue. I was lucky too that the sun was temporarily covered by a cloud when I took it – the light was very harsh in some of my other shots today, but it’s quite nice and flat here.

The first extra is a different species, and one I definitely hadn’t seen before. The thing I kept noticing about her was the green marks on the sides of her thorax – which when I uploaded the shots and enlarged them turned out to be her halteres. These are the vestiges of the second pair of wings that most insects have but hoverflies do not; instead they’ve evolved into a kind of balance organ which helps the hoverfly in flight. As far as I can tell from web research, green halteres are peculiar to the Melanostoma species; and as I have facial shots which show that this specimen has a grey face rather than a black one, I believe that she is Melanostoma scalare. 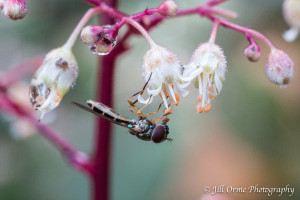 The second extra is my old friend the marmalade fly – Episyrphus balteatus – cleaning his front feet on his tongue in preparation for grooming his head. He’s much the biggest of these three hoverflies, and was therefore the easiest to photograph. In fact I nearly didn’t photograph him at all because he seemed too easy compared to the others – which just goes to show how this challenge has changed my outlook on close-up work! 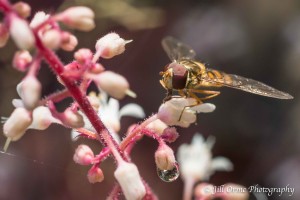