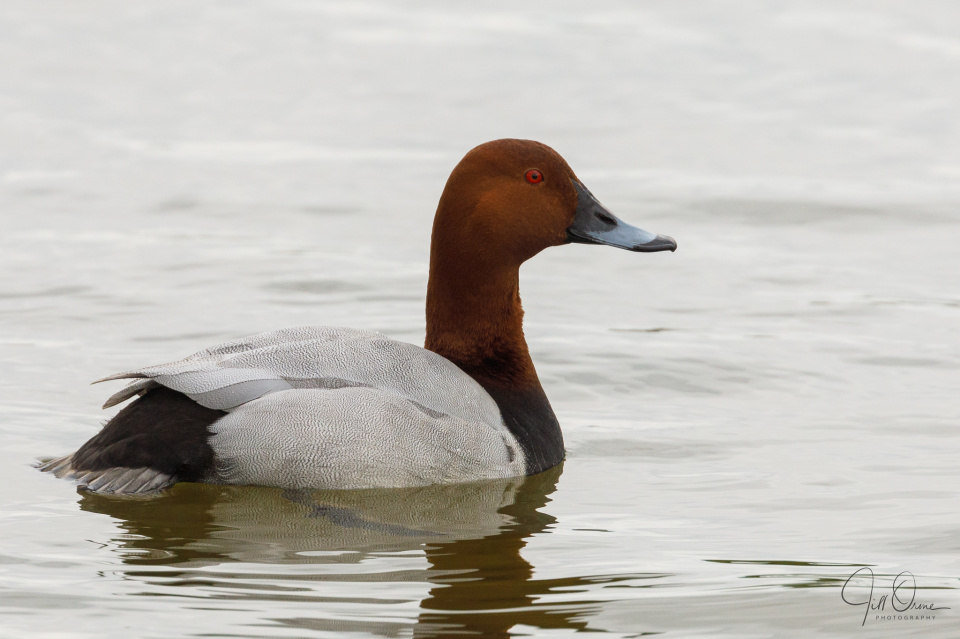 I was at Kemerton Lake this afternoon, chatting to the other person in the hide and wondering if and when something would happen out on the lake, when all the pochards suddenly left the island where they spend most of their time and swam (unusually) straight towards the hide. I couldn’t see what had upset them – this kind of kerfuffle usually begins with the sighting of a raptor, but there was nothing obviously flying around – but they were in a tizz for a couple of minutes. Unfortunately, what light there was was hitting the other channel, so I’ve struggled to bring out the colouring of this drake, but even in the gloom his staring red eyes look especially mad, I think.

It now seems clear that there’s a settled group of pochards at Kemerton, but there’s no sign of them breeding – at least not yet, though after all the hoohah died down I did think that a couple of the drakes were beginning to display, in a not especially committed fashion. But in much more exciting news, the pair of great crested grebes that I photographed last week doing a courtship dance have now built a nest and are incubating at least two eggs. I debated with myself whether it was acceptable to post photos of the nest; great crested grebes are green-list birds because their population is regarded as stable, and for a short while I did have some shots on my  Facebook page, but I continued to feel uneasy about it, and I’ve now removed them.

Great crested grebes usually lay three or four eggs in total over a period of a few days, and incubate them from the outset. Each egg needs twenty eight days to develop, meaning that the chicks hatch over the same span of time as the eggs were laid. I’ll be making regular trips to check on this pair, and hoping to see some chicks in just under a month. There’s still no sign of any little grebe chicks, though they’re supposed to hatch within three weeks, and the nest sites have been active now for at least six; I fear that predators may have been at work in the reed beds.