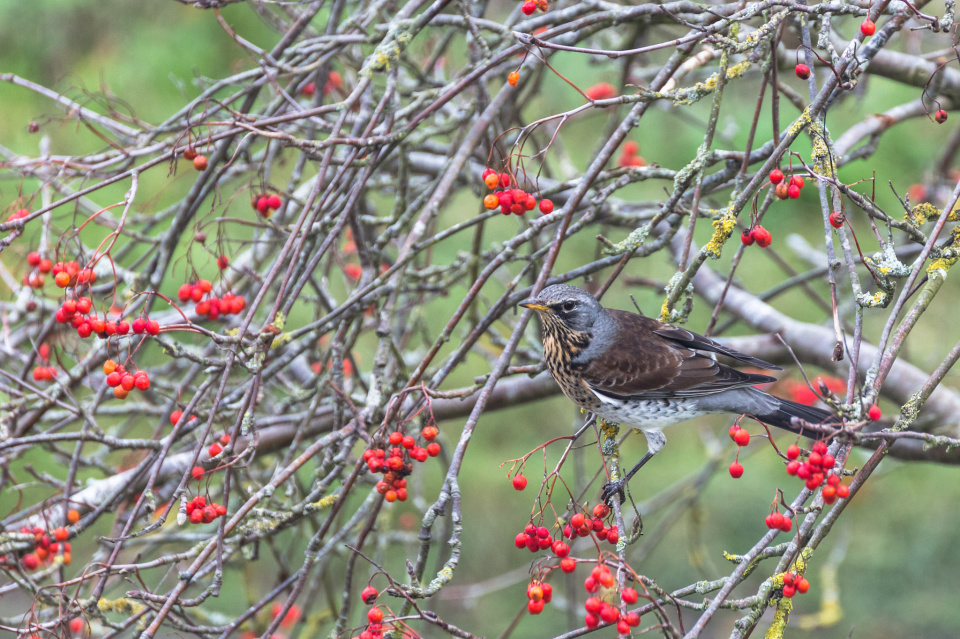 I had an idea for today’s Mono Monday theme, which involved R riding past me on a bicycle, wearing a silly hat and holding up an umbrella. But when I suggested this to him, the lack of enthusiasm in his response was almost deafening. You just can’t get the staff.

Then I became embroiled in the construction of a gallery page on this site, which was less complicated than I had expected, but more time-consuming than I needed it to be. Several hours slid past while I was buried in the computer and not keeping an eye on them.

I suddenly noticed that it was the middle of the afternoon and the light was fading fast, and as yet no photo had been taken. Luckily at that moment I saw a fieldfare in the rowan tree in the front garden – we’d first seen it earlier in the day, but it had spotted me when I went to the window with the camera, and had flown away. This time I managed a few shots before it realised it was being watched. Do look at this full-screen, if you have time – it’s much better against the dark background.

We almost took down this scrubby rowan tree back in the spring, but reprieved it because bullfinches are fond of the berries. I haven’t seen any bullfinches so far this autumn, but the presence of a fieldfare is enough to make me happy that we left the tree in place.