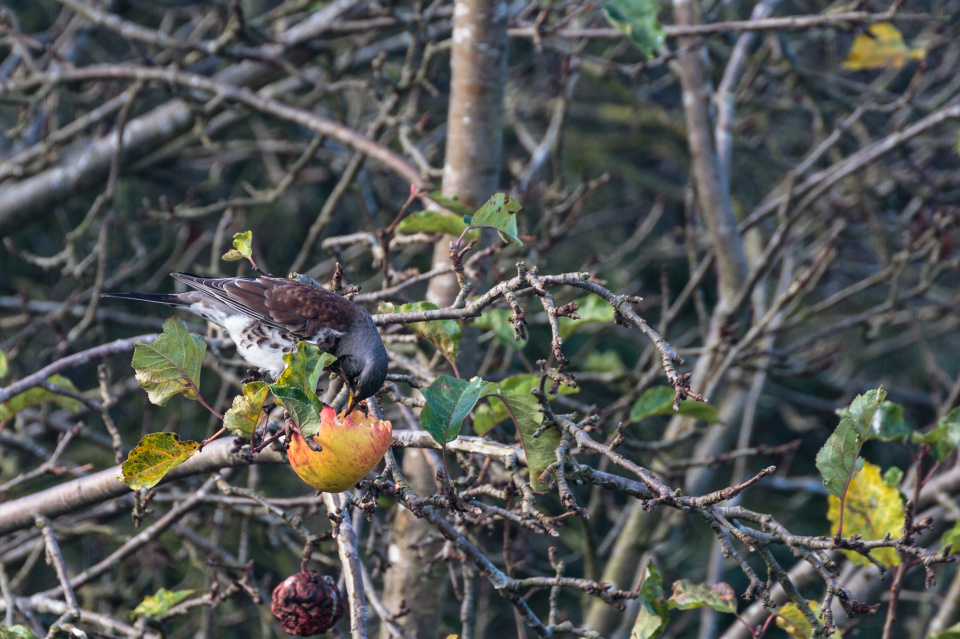 R spotted this fieldfare from one of the back bedrooms this morning – the first that either of us has seen in the garden this winter. I got quite a few reasonable shots – surprisingly, as I was shooting through a very dirty double-glazed window – but we both liked this one of it lunching on an apple.

Fieldfares belong to the thrush family; they breed in northern Europe but migrate south in the winter, and many turn up in the British Isles. They’re omnivorous, but are very partial to fruit – and as we have several apple trees, we do expect to see them in the garden from late autumn onwards.They’re generally social, so I expect that this one has some friends and relations nearby; but they’re fairly shy, so it’s not that common for us to see one as close to the house as this. Having said which, the males can be feisty, and one year we had one which decided that all the windfall apples on the top lawn belonged to him, and spent quite a lot of time and energy defending them – even if he had a perfectly good one of his own, he went completely spare if a blackbird or magpie approached one of the others. He was very amusing to watch and we became quite fond of him, despite his temper and lack of company manners, and we were rather sad that he didn’t come back the following winter.

Another winter visitor which has arrived back in the village in the past few days is the redwing. They’re trickier to spot though – they’re smaller than fieldfares and seem to be constantly on the move, often swooping about in small flocks, and I generally identify them by their size, shape and behaviour long before I get a good enough look at a stationary bird to confirm the markings. I’ve never managed to photograph one yet, but perhaps this will be the year!