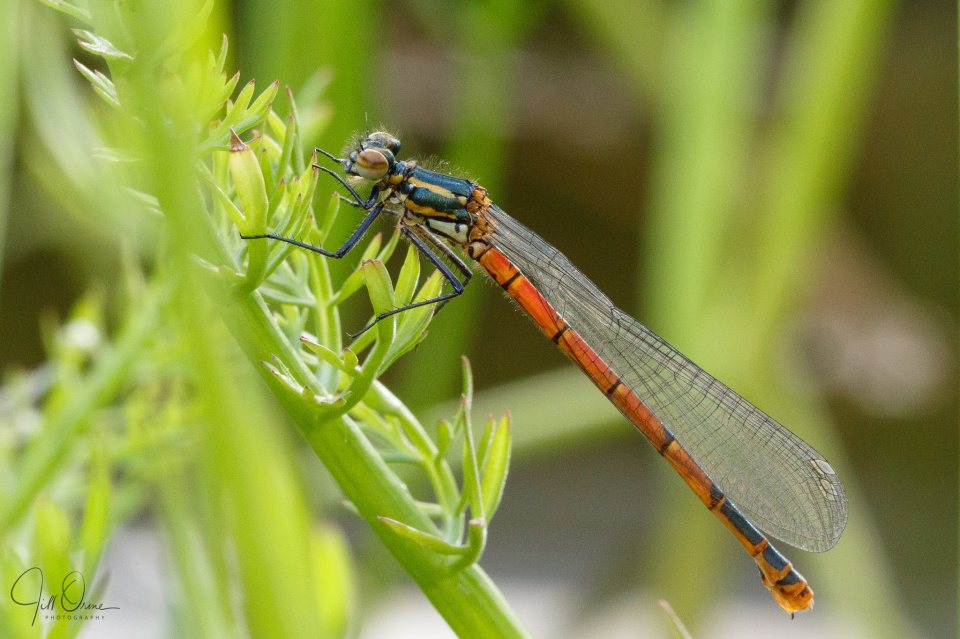 … another Large Red Damselfly. This one, though, is a newly-emerged female, and  – yay! – she came out of our little free-standing patio pond. Shortly after I took this she hied herself away to the trees to feed up and make some eggs, but maybe she’ll return in a couple of weeks when she’s matured, and help to re-stock this pond.

We had fun in the sun with the Family B today. Baby B is developing a keen sense of humour, and devised a new game while he and I were both lying on a rug on the lawn. He would wriggle frantically for a few seconds, causing himself to move across the rug on his back, and then he’d pause and look at me to assess my response. I would laugh and encourage him, and he’d do it again – and then wait for the audience reaction before repeating once again. This went on for a couple of minutes, and he was clearly very pleased with himself for having come up with something that got so much reaction. If he’s this much of a performer at less than six months old, I dread to think what he’ll be like by the time he goes to school; on the other hand, he’s managed to be born into a family of shameless show-offs, so he might as well start learning to hold his own sooner rather than later.

Sadly the old saying “tears before bedtime” proved apt, though the problem was the sticky heat of the day, rather than Baby B having overexcited himself: it was so hot in the house by early evening that he couldn’t settle when he was put to bed, and became very distressed. Eventually the combination of a blackout blind and two fans lowered the temperature enough in his room to allow him to drift off, but it was an exhausting end to the day for everyone.