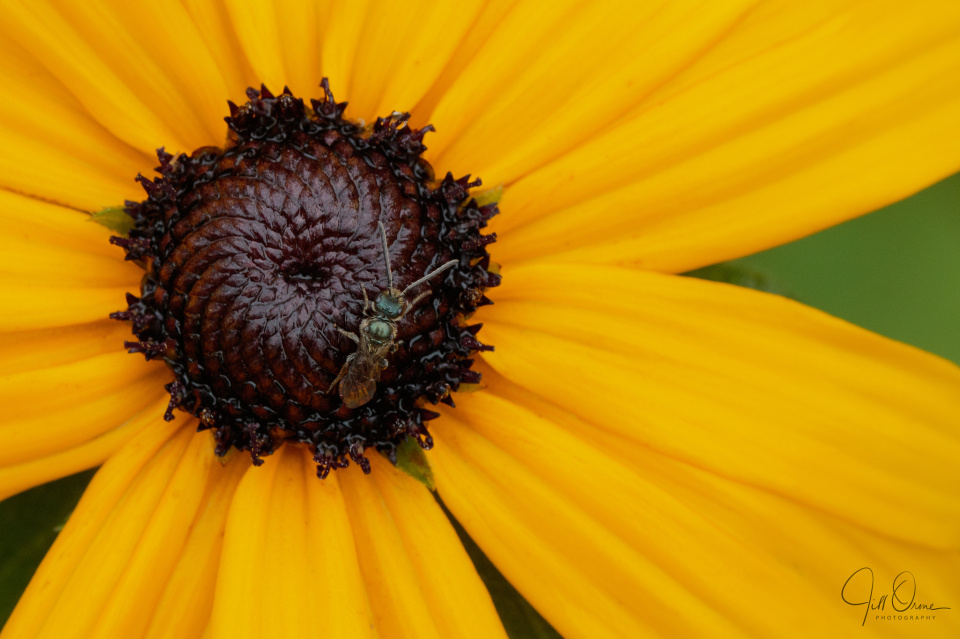 It rained solidly and hard all morning, but stopped around the middle of the afternoon, at which point all the bugs that had been sheltering from the weather emerged, and so did I. I had to wait a while to get a photo of a Lasioglossum on this rudbeckia, and even then it wasn’t a very cooperative subject (note the moving foreleg), but I like the contrast of textures and colours here, which is why I’ve chosen it for today’s post.

The genus Lasioglossum is a huge one worldwide, and even in the UK it contains over 30 species, most of which can’t be fully differentiated from photos. In the absence of microscopic examination these little shiny chaps are just described as being in the “morio group”, which comprises four species that all have the same blue-green or bronzy metallic sheen. Most Lasioglossum species nest underground, often in large aggregations (though they’re still regarded as solitary bees), but the morio species will also nest in the soft mortar of old walls. In America they tend to be referred to as sweat bees, but in the UK we’re more likely to call them furrow bees.

The rudbeckia is interesting me at the moment because it has suddenly popped up in one of my front borders, two years after its parent plant died, and about a metre away from where that one used to grow. Rudbeckias are sold as perennials, but have a reputation for not living very long, and given the evil nature of our soil I was disappointed but not surprised when the one I planted gave up the ghost after just four years. Last summer I decided against replacing it, and filled the gap it left with stachys, which has flourished and done exactly what I wanted it to, which was to attract Wool Carder bees. When a small seedling appeared a few weeks ago, further along the border and so close to the edge as to be almost in the lawn, I didn’t know what it was, but I left it to grow until it was big enough to identify itself. The fact that it turned out to be a new rudbeckia is very strange, but rather welcome – except, most probably, to the Man with the Mower.