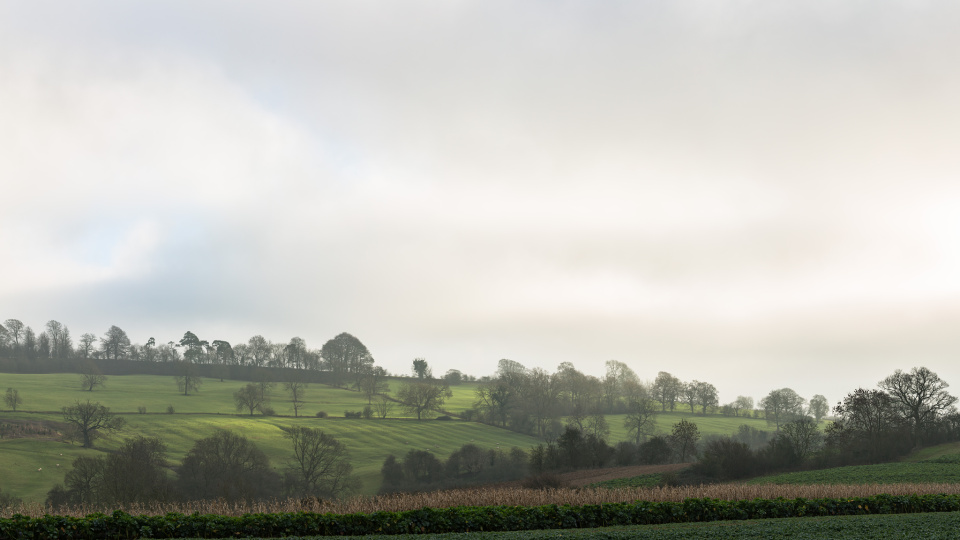 It was a lovely morning in our little valley, so after walking Arthur and doing a few chores at home I went off with the camera, looking for landscape shots. To my surprise, as soon as I made it up to level ground I found myself completely surrounded by heavy low-level murk.

I thought it might just be a Worcestershire thing so I pressed on over into Warwickshire, but it was at least as bad there. When I arrived at the foot of Meon Hill it looked like this – believe it or not I’ve cranked the Dehaze right up on that shot, and brightened it as much as it would take without the sky blowing right out. By now I was starting to feel discouraged, but I thought that I might as well take the scenic route home, so I drove up the road which goes through a notch between Meon and Ebrington Hills and then meanders down past Hidcote and Kiftsgate to the village of Mickleton.

At the highest point of this road there are a couple of field gateways on the Ebrington Hill side, one of which has a nice view north-eastwards on a clear day and has provided me with some good dawn shots in the past. I stopped the car and got out to take a look, just in time to catch a shaft of sunlight coming through a tiny window in the cloud, hitting the hillside and emphasising the contours of the land. I was especially interested in the pattern of ridges here – I don’t know if they’re a natural consequence of land slippage or the remnant of mediaeval ridge and furrow cultivation, but given their orientation on the hillside I like to think they might be the latter.

For the next couple of minutes the sun threatened to come out properly, allowing me to take this view; but when I pointed my camera northwards across the valley the vista was still very murky – on a good day you can see the distant hills quite clearly, but this was not that day!

All the time I had been standing at this spot a pheasant had been grumbling and complaining behind the hedge on the Meon Hill side of the road, and he finally got tired of waiting for me to go away and flew past me onto Ebrington Hill, making a furious racket. I quickly panned and focused (have I mentioned how much I love this new lens?!) and took two frames, the better of which is here.

I’m very late posting this, partly because it was choir practice this evening  (Bach is so difficult!!), and partly because Lightroom chose tonight to throw a very odd hissy fit at me and kept removing my exported jpegs to some alternate universe of its own creation, beyond the reach of me or Finder. I’ve never experienced this before, and if it ever happens again Words Will Be Said.

In other news: I’ve been keeping one eye on the Blipfuture crowdfunding appeal this evening as it moved slowly through the upper reaches of the ninety thousands – and a final refresh of the page a few seconds ago has revealed a new total of £100000.00. 55.6% of the way there…