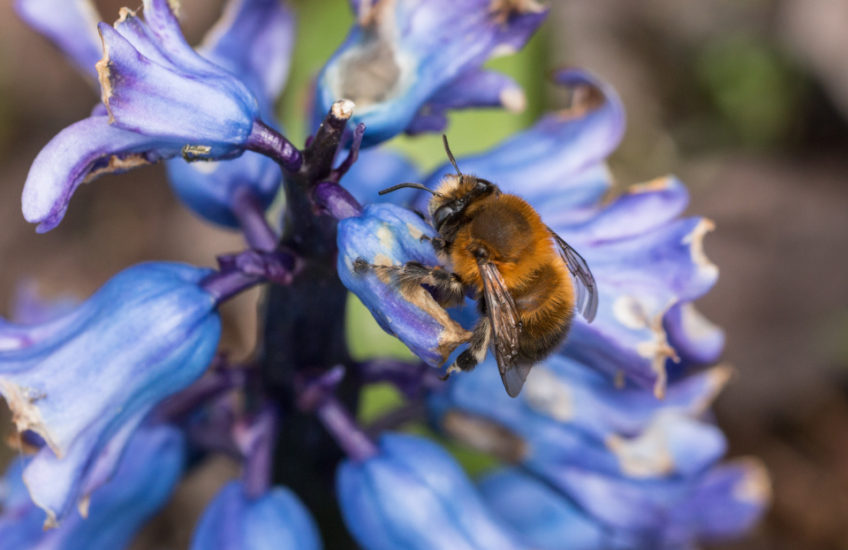 This is Anthophora plumipes, the hairy-footed flower bee – how do you suppose it came by that name?

I spent most of this morning at my desk, alternately doing useful things and faffing around with potential entries for the IGPOTY Mono Project competition, but after managing to miss the only brief spell of sunshine we had yesterday I was also keeping an eye on the light in the front garden. Around noon it began to look promising, so I went to check out the flowering currant bush and found it humming with honeybees. Every now and then a deeper drone would make itself heard as a larger bee arrived, and I soon realised that most of these had quite distinctive pale faces and pretty terrifying mouth parts. I had no idea what they were, and they were mostly moving pretty quickly, but I managed some reasonable shots of them working; this one is my favourite of that set.

Then I spotted this little chap on the bedraggled remains of a hyacinth – I initially thought he was dead, but when I moved the flower head to check he hauled himself to his feet and moved to a slightly safer place, so he was clearly just zorsted and taking a break. I wondered about getting some sugar water for him, but as I really don’t know what I’m doing when it comes to bees I decided that he was probably best left to his own devices.

Though I didn’t know what they were while I was photographing them, as soon as I uploaded my shots and took a look I realised that they had to be hairy-footed flower bees. I posted a couple of images to UK Bees, Wasps & Ants on Facebook for confirmation, and someone told me that they’re also easily identified as males, because the females of this species are black with ginger leg hairs.

I also photographed another insect today that I’d never seen before, and this time I really couldn’t identify it. But luckily Facebook came to my rescue again: it turned out to be Bombylius major, the large beefly. I’m happy to have added two more new species to my iRecord entries, and even happier that the bug spotting season is now under way in the Shire.