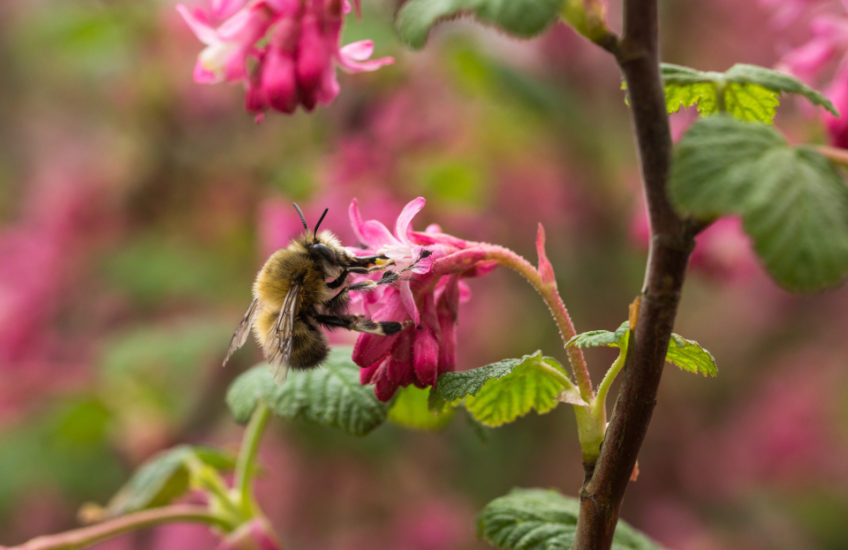 But really – look at his little hairy feet! Adorable…

I’ve also put in an extra (which sadly demonstrates that 1/250 wasn’t quite fast enough), showing him flying in towards this currant flower with his tongue at the ready. I know they look slightly scary, but they’re really not at all dangerous – they’re only about the size of my thumb nail, and the males can’t even sting. 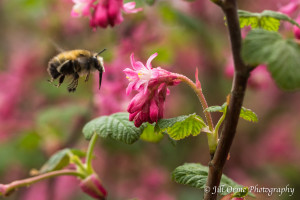 The weather forecast looked promising this morning, so I decided to do some weeding in the front garden. There were numerous bees whizzing about, including some Anthophora plumipes females, but most of them were moving much too fast to be photographed. I really wanted to show you a female hairy-foot because they’re very dashing – black, with ginger leg hair – but even though a couple of them were happy to fly literally past my face while I was bending over pulling up couch grass, every time I took off the gardening gloves and picked up the camera they disappeared at speed.

I will persevere in the next spell of good weather, but today was not that day. After I’d been outside for about an hour the rain started, and having arrived it stayed for the rest of the day. Apart from the quarter hour when it hailed. Still, things could be worse – I’m aware from the photos I keep seeing that it’s snowing in parts of Canada and the north east United States, and considering that we’re heading towards the middle of April, that really does seem a little harsh.