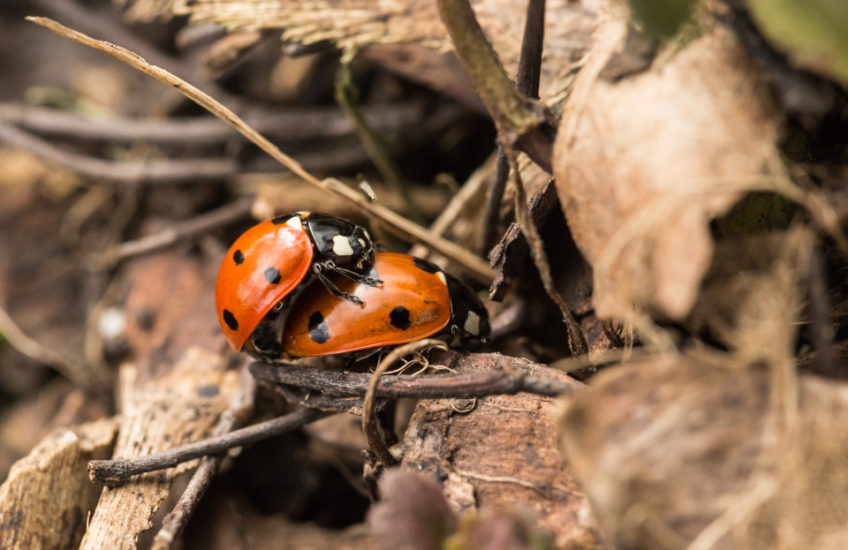 We all love a ladybird, don’t we? And it would appear that ladybirds are also quite fond of each other. I was walking around the garden with the macro lens, looking for today’s crop of Bugs I Cannot Identify, when I spotted a little blob of red down in the undergrowth. My thought process went something like:

Oh – a ladybird.
Oh – two ladybirds together. What are they…?
Are they…?
Yes, I’m sure they are…
Oh yes – that’s definitely what they’re doing.

It looked as though the male was having a great deal more fun than the female, whose demeanour seemed to speak more of endurance than anything else – but it appears that (not unusually) I was anthropomorphising. I’ve looked up ladybird copulation on the interweb so you don’t have to, and it seems that the process was barely getting under way here – the male was trying to lever himself into position, and it’s only when he’s achieved that and taken a firm hold of the female’s wing cases that mating will begin. Having begun it can last for several hours – so I needn’t have been so grumpy when my camera battery ran out: if I went back to the same spot now, the ladybirds would in all probability still be there.

Other things you might care to know about ladybird reproduction:

Females are highly promiscuous, and can lay eggs fertilised by more than one male. It’s thought that the male stays in position for so long during copulation in an attempt to exclude his rivals.

Ladybirds have one of the highest recorded rates of sexually-transmitted infection among insects.

Still quite cute though…