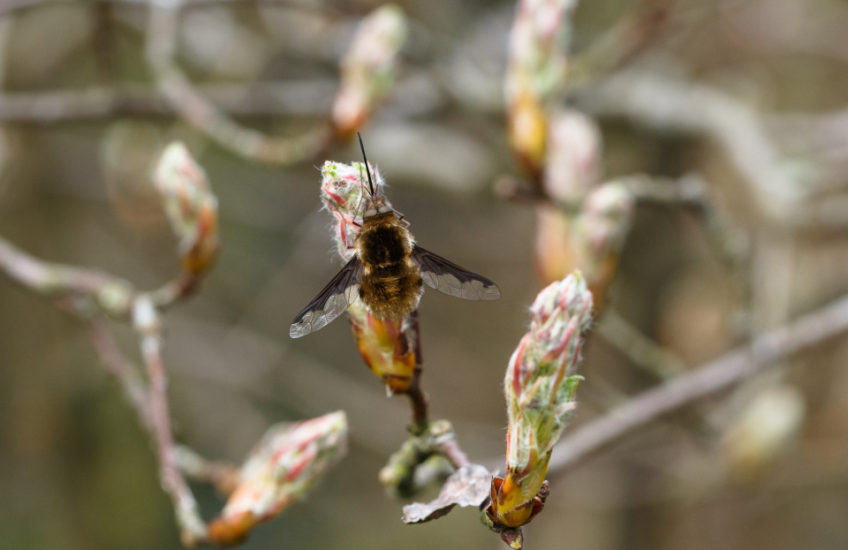 R and I were wandering back up the garden after removing the product of this morning’s Rough Gardening session to the burn pile, when we stopped at a patch of sweet violet so I could show him the Anthophora plumipes doing their frantic patrolling thing: “AAARRRGGGHHH!!! Still no women!!!”

I was pointing out the fact that they sometimes fly with their tongues extended, when I realised that I was actually talking nonsense (owing to the fact that I wasn’t wearing my glasses); and that the tiny creature that had come to rest on the amelanchier wasn’t actually a Hairy-footed Flower Bee at all, but was in fact a Bee-fly. I was desperate to get the record, because I knew that this year’s Bee-fly Watch was only launched four days ago, with the first record (from the Isle of Wight) being posted one day later; but I also knew that the camera I had to hand was wearing the Big Lens (minimum focus distance: 10 feet).

“Stay here and watch it!” I said to R – quite illogically, because what was he going to do to stop it if it decided to fly away? – and dashed to the house, shedding gardening shoes as I went and bounding upstairs to grab the other camera and macro. Hobbling rapidly back down the lawn with my shoes only half back on, I found R patiently guarding Bombylius major, who was still resting on the amelanchier bud. Many, many photos were taken from various angles – of which I’m posting two, to try to show you how bizarre and distinctive these little soldierflies are. Afterwards I did the Crash Bandicoot dance around the lawn, while R laughed and shook his head at me in tolerant bemusement. 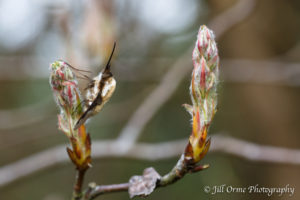 Before we all get too carried away by my triumphant posting of only the fifth record of this species this year – and the fact that this photo is now the cover image of the British Soldierflies and Allies group on Facebook – I should just point out that the presence of Bee-flies is bad news for my solitary mining bees: B. major lays its eggs in mining bee burrows, and its larvae parasitize the bee’s larvae, eventually killing them. However, this has been going on for a long time, and so far as anyone can tell, there is a balance between the Bee-fly and its victims which allows both to prosper – in fact, the presence of Bombylius major is evidence of a healthy population of mining bees.