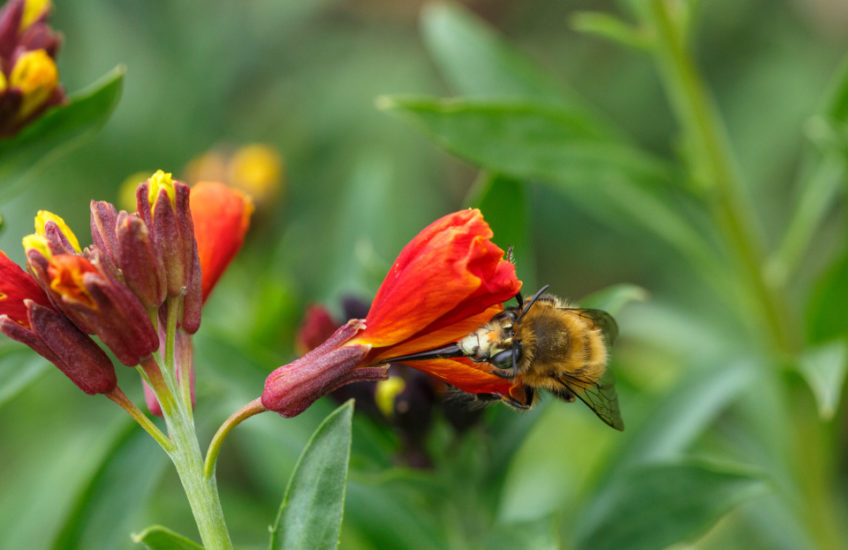 OK, so we’re a few days into the bug season now, and I think you’re adequately trained up to be able to cope with this. I don’t actually know if Anthophora plumipes (the Hairy-footed Flower Bee) has the longest tongue of any British bee, but I think it must be well up the league: the tongue of this male looks to be almost the same length as his body. I haven’t managed a decent photo yet this year, but they quite often fly with their tongues extended, and dart them into flower heads almost in passing – which I guess is a pretty efficient way of staying fuelled up. There were at least a dozen male A. plumipes in my garden today, but still no females – so the boys were getting a little hysterical, and quantities of nectar were being consumed; as well as pulmonaria and wallflowers, I spotted them feeding from a flowering currant, a Mahonia media and a Daphne odora ‘Aureomarginata’.

In case the slightly alien appearance of Mr Hairy-foot is too disturbing for you, I’ve added a shot of a Tree Bumblebee (Bombus hypnorum) on the mahonia. This species is an immigrant from mainland Europe (no, don’t start), and was first recorded in the UK only in 2001, but it has now spread right through England and Wales. It’s pretty unmistakeable, being black with a ginger thorax and a white tail; the thorax often shows a worn, bald patch, as in this queen. I’ve never found individuals to be aggressive, but B. hypnorum has a reputation for hostility if its nest is disturbed, and colonies are sometimes found in bird nesting boxes or even in the eaves of houses, where they can potentially come into conflict with people. 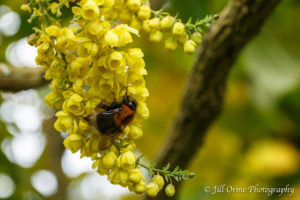