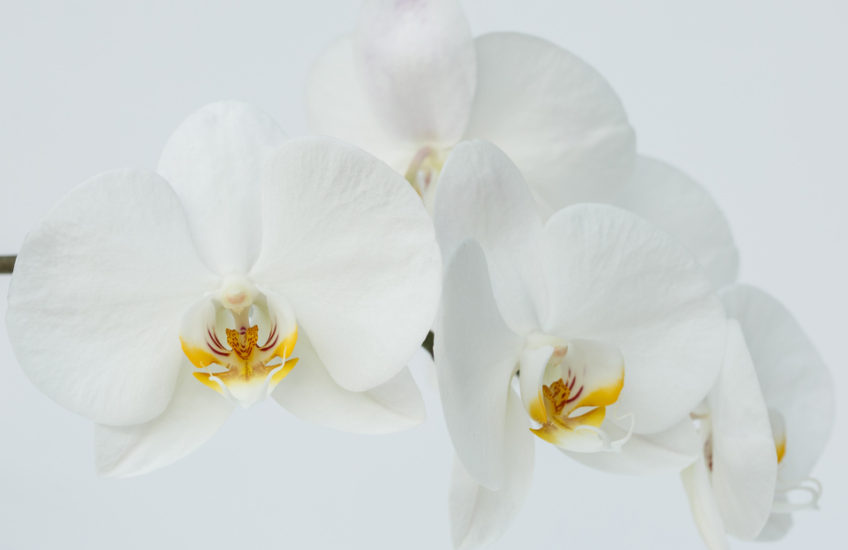 My mother was very fond of Phalaenopsis orchids – the last family home had a whole row of them lined up along the kitchen windowsill. I have a very strong memory of an occasion when she decided (as a distraction from something far more significant that was going on in all our lives at the time) that they were pot-bound and had to be re-potted immediately; and as she didn’t drive I took it on myself to source some appropriate pots and compost, and helped her to rehome them.

When she moved to a tiny flat several of the orchids went with her, but during her final stay in hospital most of them died – even though they thrive on neglect, several weeks in a warm room with no water was too much for them. I went one day to remove some of her valuables, in case of break-in, and discovered that there was just one which still showed a faint spark of life, so I brought it home with me, revived it and put it on a north-facing windowsill, and several years later it continues to reward me with these sprays of beautiful flowers.

I was thinking about all of this while setting up my mini-photoshoot this afternoon, and realised to my surprise that the re-potting took place nearly ten years ago – as often happens with memory, it feels both much nearer and much further away in time than that. I now feel slightly guilty towards my orchid – a decade in the same compost is surely overdoing the principle of neglect – so as soon as this flush of blooms goes over I will carefully pot it on, and then leave it for a while in a cool, dimly-lit place so that it can get used to its new circumstances, before returning it to the windowsill.