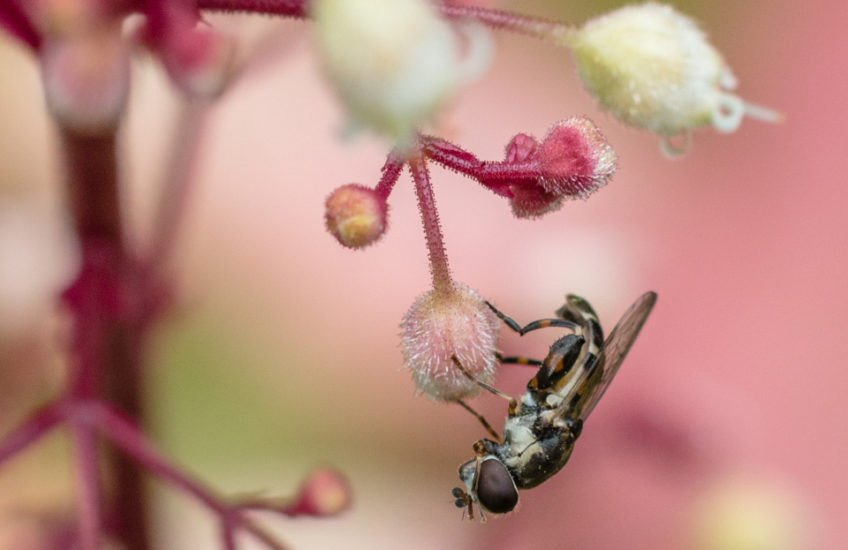 I believe that this is Syritta pipiens, the thick-legged hoverfly. After gingerly stepping on the bathroom scales this morning, I sympathise with her – it appears that I ate all the food in London over the weekend, and it’s absolutely no wonder that my jeans are too tight for comfort.

I captured several reasonable shots of her, but I like this one because she’s washing her face. To give you an idea of her size, she’s resting on a bud of Heuchera ‘Marmalade’ which is about 3mm long. This is a very common species in England, but easy to overlook because of its size and dark colouring, so I was pleased to have spotted her. There are some more shots here.

The extra is a bee that I found on some tansy – it was quite easy to photograph, but I then had to spend ages trying to identify it. I may yet be wrong – in which case I hope someone will put me straight – but I think it’s a leaf-cutter bee. This is one of the solitary bees – of which there are over 200 species in the UK – and I knew essentially nothing about them until today. I now know that they’re superb pollinators, and that the small amount of damage they might do is well outweighed by the benefit of having them around; I’m thinking of putting up a bee hotel to give them a helping hand. There is some quite good information here, and some more shots here. 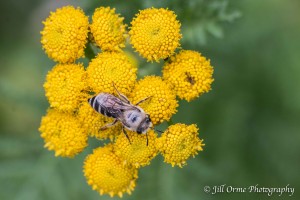 Edit: the people who run the Facebook group UK Bees, Wasps and Ants later told me that this was in fact a rather exhausted Colletes sp. bee, but couldn’t take the identification further than that. Colletes are ground-nesting solitary bees.