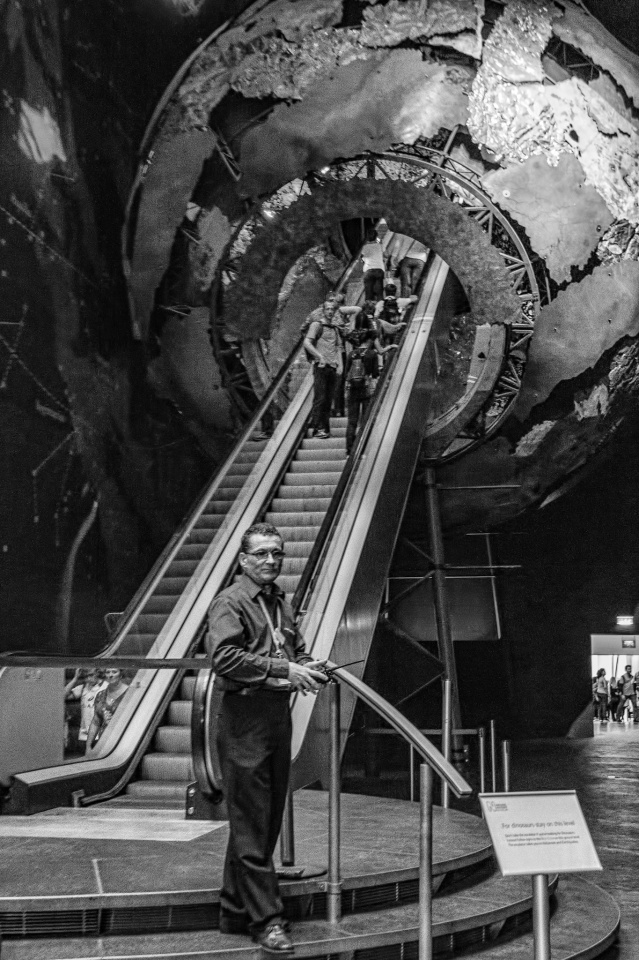 This steward was looking a little weary at the Natural History Museum this lunch time, and I can’t say I’m surprised – the place was absolutely rammed. When we arrived at 10.30am we were directed away from the main entrance to a side door, where the queue was only about 200 yards long and moving reasonably fast; but by the time I took this, about two hours later, they were holding the entrance queue back and only allowing people in as others left. It wouldn’t surprise me if there was a large clock in the staff room, counting down the seconds until the schools go back.

R and I were at the NHM on the final morning of our London break to see the Wildlife Photographer of the Year exhibition, which I thoroughly recommend. There are some absolutely stunning images – though I have to say that I’ve seen shots on Blipfoto that would easily stand up against the finalists, and I hope that some of my Blip friends and acquaintances will be submitting their work to this year’s competition. But please don’t take my word for it – do go and see for yourself! If a trip to London isn’t in your schedule, it’s worth checking this page for the exhibition’s tour dates.

After fighting our way back out of the Natural History Museum and diving into a cup of coffee in the less hysterical environment of the V&A over the road, we took the decision to drop down to Tate Britain, where I was pretty sure I’d left a favourite cardigan yesterday. I’d already phoned twice and been told that it hadn’t been handed in, but I had a nagging feeling that it was there – and R would rather spend almost any amount of time on London Underground than live with one of my nagging feelings, so off we went. On arrival I explained my problem to the man at the entrance desk, and we were then directed to the basement cloakroom where I explained it again (twice); but I was assured that no cardigan had been brought to Lost Property and invited to fill out a form in case it turned up later. After that we agreed that more coffee was probably a good idea – and it certainly was, because R’s approach to the young man at the counter: “We’d like two lattes please, and did you by any chance find a cream cotton cardigan in here yesterday?” was met with “This one?”, and the production of my cardigan from a cupboard. So we had cake as well – and jolly good it was too.

Tomorrow I’ll start to go through the shots I took over the weekend (in and around dealing with a mountain of washing, and a heap of receipts only very slightly smaller – London doesn’t seem to have become any cleaner or any cheaper since we were last there!), and I’ll put up some back blips and maybe make a Flickr album too. Right now I’m off to reacquaint myself with my own pillow.