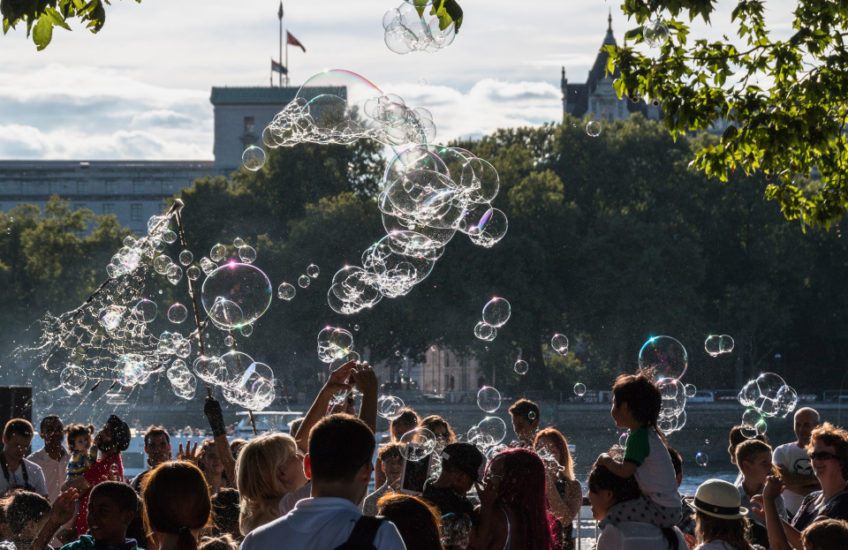 We began the day at Tate Britain, which is a wonderful gallery – I could have spent half a day there with no problem at all. They also have a great cafe!

Then we had an appointment to meet R’s sister, brother-in-law, niece and nephew, for lunch. We were late. Not just a bit late, but really, horribly late. The fault was equally divided (probably fortunately for our marriage). I kept dawdling along the Embankment in an “Oh look! Another photo opportunity!” fashion because I’d misremembered the time we were supposed to be meeting them; and then when R’s mounting stress and irritation finally penetrated my brain and I changed up several gears, we put on a burst of speed and arrived only slightly late… at the wrong restaurant. This was because, instead of reading J’s immaculate instructions, R had simply Googled “Strada Tower Bridge” without stopping to consider that there might be two branches, on opposite sides of the river. It was a hot, humid day, and after running across the bridge we arrived in a terrible state – highly embarrassing, but they were all very sweet about it considering the length of time they’d been sitting there.

After a lovely catch-up, they went to watch an open-air theatre production with which R’s niece is involved, and R and I strolled back along the South Bank as far as Charing Cross. The river walk was thronged with people enjoying a sunny Sunday out, and the area around the arts complex was especially busy with street performers of one kind and another. The woman whose gloved hands you can probably make out towards the left of this image was using two poles with a net strung between them and a large container of soapy liquid to create bubbles, which she was flinging out across the crowd surrounding her. The watching adults seemed nearly as charmed by this as the children – it was a very joyous scene, and an appropriate end to a lovely day.