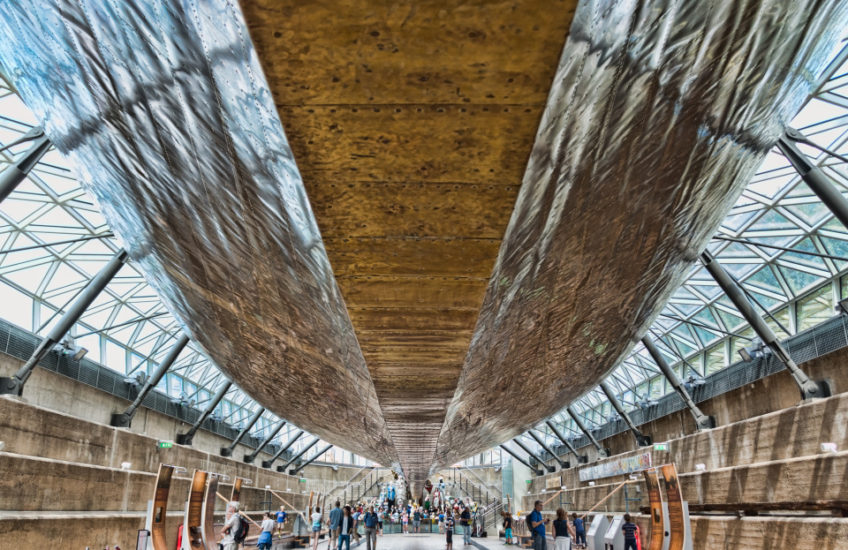 After breakfast (which is worth a mention – K+K hotels do a seriously good buffet breakfast) we tubed down to Westminster and took a river cruise out to Greenwich. The river trip lasted about 45 minutes, and the skipper treated us to a running commentary on the sights of interest we passed that was as entertaining as it was inaccurate.

As we disembarked at Greenwich I was dismayed to see that the Cutty Sark appeared to be sailing in a glass sea, which I thought a very gimmicky presentation of this venerable old tea clipper. However at the end of the guided tour, which was interesting and informative (and I suspect rather more accurate than the earlier one!) we were able to wander through the ship, and eventually came to this space right underneath the keel where the point of the glass became obvious. There is a cafe at this level as well as some information displays, and what looks in this photo to be a group of brightly-dressed figures at the far end of the hall is actually a permanent exhibition of old ships’ figureheads.

We then walked a few hundred yards to the National Maritime Museum, which has some fascinating displays on various aspects of Britain’s seafaring history. We didn’t have time to cover everything, but the room dedicated to the life and career of Horatio Nelson (including the clothes he was wearing when he was shot and killed during the Battle of Trafalgar) is interesting enough on its own to be worth the trip.

A serious hike up a very steep hill took us to the Royal Observatory – which was a total zoo. The little courtyard in front of it was packed with scores of people apparently queuing to go and stand on the Greenwich Meridian, and just getting through the press of people to the Observatory was a bit of a mission. The building itself was less crammed, but it was furiously hot, so as soon as we’d seen John Harrison’s timepieces – the three large clocks which were rejected, and the small one which eventually won him the Longitude prize – we left at speed. This was definitely a good decision because we had to push our way back down the hill through the press of people coming up, and as crowded as it had been when we were there, it was undoubtedly going to become more so as the afternoon went on.

We took a train back into the city and made our way back to the hotel, where we relaxed over a drink in the garden before changing and going back up into town for dinner and a show.

We’d heard good things of The Curious Incident of the Dog in the Night Time, and it certainly didn’t disappoint – if you know the book you can safely see the play without fear of disappointment, and if you don’t it stands on its own merits. The performance by Siôn Daniel Young as Christopher was extraordinary, the staging was excellent, and the whole thing was utterly gripping. We both think that it was one of the best things we’ve ever seen in a theatre.