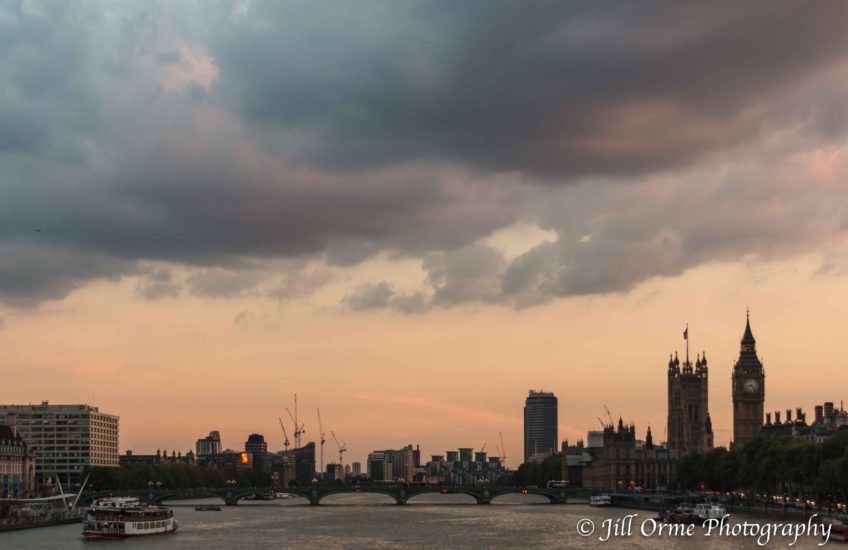 When I asked R what he wanted to do to celebrate the Big Birthday, he decided on a few days in London doing touristy things with me, followed by a family meal out on the day itself. We lived in London for a number of years without ever really doing much of the tourist trail, so we were confident that we’d find plenty of things to keep us amused through a long weekend – and also be able to maximise the use of time because we know our way around so well.

We travelled down by train this morning, dropped our bags at the K+K George Hotel in Earls Court, and went off to St Paul’s Cathedral, which neither of us had ever visited (despite the fact that I used to work in Fetter Lane, and regularly walked past the place on my way to and from London Bridge Station!). There’s a flat entrance fee of £18 per adult – which seems steep until you consider how much it must cost to keep the building in good repair – but unlike some other cathedrals we’ve visited, that single entrance ticket gets you into all the public areas of the church.

We began by climbing the dome – and it is quite a climb. There are 528 steps to the Golden Gallery at the top; though you can catch your breath in the Whispering Gallery half way up (don’t bother with the whispering bit – it doesn’t seem to work), and again in the Stone Gallery which is about 2/3 of the way up. The Whispering Gallery is inside the cathedral, but the other two are outside, with spectacular views across London.

Photography is forbidden inside the cathedral – which is difficult for a Blipper, but understandable – but between the Stone and Golden Galleries there is a landing with a window set into it, allowing you to look directly down into the nave. As there were no signs there telling you not to, I decided that it must be OK to take a photograph through it – so I did, and that’s the first extra. 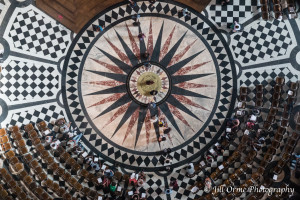 The second extra is the view south-westwards from the Golden Gallery, across and along the Thames. The bridges you can see (from left to right) are the Millennium Footbridge, the two Blackfriars Bridges (rail and road), Waterloo Bridge, and in the far distance the Hungerford Railway Bridge with the pylons and stays of the two footbridges that sandwich it. 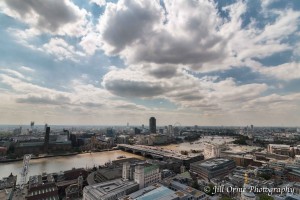 Back at ground level we walked round the main body of the cathedral, and then visited the crypt where a number of notable figures are buried, including Horatio Nelson and the Duke of Wellington. I hadn’t expected to be emotionally stirred by this experience, but I was. We also happened across an extraordinary video installation in the cathedral called Martyrs, by the artist Bill Viola, which I found profoundly moving.

After St Paul’s we came back to the hotel to check in and unpack, and spent a very pleasant hour sitting in the lovely enclosed garden, chatting and drinking Aperol spritz. Refreshed and rested, we tubed up to the National Gallery and renewed out acquaintance with some favourite paintings; then popped round the corner to the National Portrait Gallery to see this year’s BP Portrait Award Exhibition. I wasn’t as impressed with this as I’ve been in the past – I certainly didn’t care for the outright winner. I think maybe it would have been a good idea for me to have seen the BP before standing in front of Van Eyck’s astonishing self-portrait in the National Gallery, rather than after!

We had dinner in the Portrait Restaurant at the top of the NPG – excellent food, and a wonderful view across the city – and then before coming back to the hotel we walked down to the Embankment and onto the Hungerford Bridge, where I took a few photos of the river in the fading light.

R chose this shot because it doesn’t have the Millenium Wheel in it – he doesn’t like the extent to which the Wheel towers over everything else around it. I’ll put some of my others into a Flickr album tomorrow. The version originally imported to this site from my Blipfoto journal was processed in Topaz Adjust – but I’ve since decided that it was overprocessed, so I reworked it in Lightroom and put the improved version here.