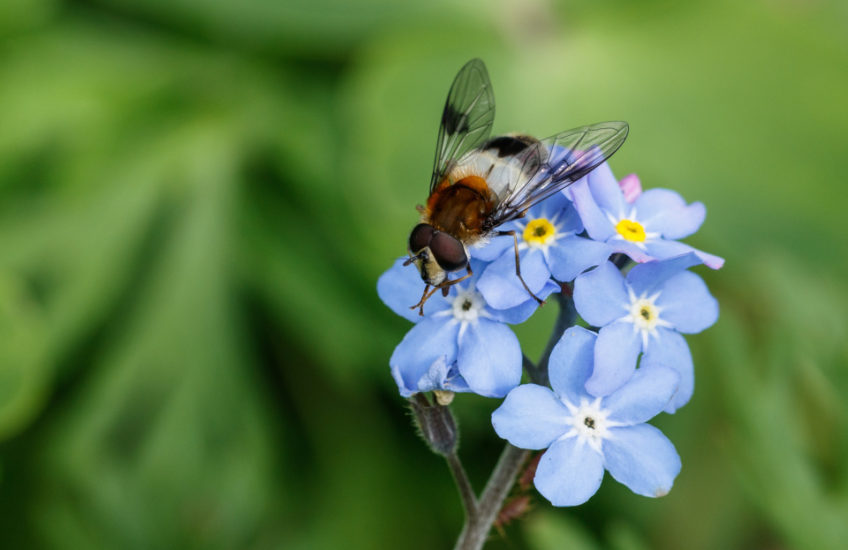 I had a fairly irritating morning doing battle with my PAYE software, which had to be updated twice before I could use it (always a nerve-racking situation, especially at the point where you need to close off one tax year and begin the new one); the situation was further spiced with the tension of having to decide whether to keep holding in an apparently endless queue to speak to someone at HMRC for advice, or simply to busk through the problem on my own. In the end I busked, and on the second update the thing worked – but a task that should have taken me thirty minutes wound up taking two hours.

My plan to take advantage of some nice morning light by going to Charlecote in search of fallow deer thus bit the dust, so I decided to photograph some of the beautiful apple blossom which is now emerging on our trees instead. After about five minutes of that I got bored, and started bug hunting – and thus passed the next couple of hours.

This stunning hoverfly doesn’t have a common name, so he’ll have to be addressed by his proper one, which is Leucozona lucorum. This species is found throughout most of the country, especially in wooded areas – but according to Falk (one of the acknowledged experts in this field) the flight time is from May to August, so this male has emerged quite early. His pristine condition suggests that he’s pretty fresh – and he was certainly quite nervy and reactive, so I was lucky that having spotted and lost him several times, he eventually came down on a patch of forget-me-nots to feed, and then as you see here to groom himself.

I was far too pleased with L. lucorum not to blip him – but if you’d like to see some apple blossom, please do click through to my Facebook page.