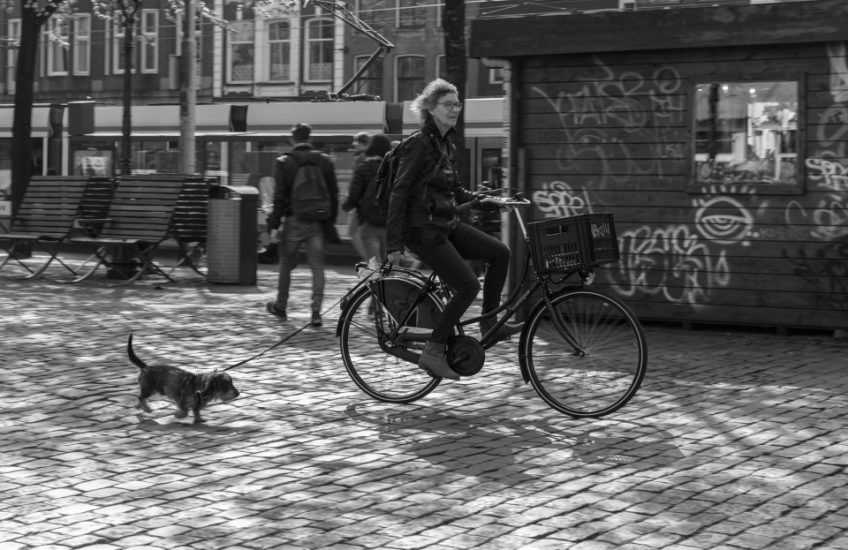 There are a number of clues in this image as to where R and I have spent the past few days, and many of you will probably have guessed the location straight away. But in case you’re still wondering, let me give you a few more hints:

When I captured this scene we were on our way to visit one of the city’s many notable churches, this one a bright, elegant, C17th building with tall, plain-glass leaded light windows, which was built after the conversion of the country to Protestantism, and which is the final resting place of a Very Famous Artist.*

We then walked on towards one of the most visited museums in the world (home to a number of paintings by the same Very Famous Artist), for a final coffee and cake before checking out of our hotel and heading for the airport. They do excellent coffee and cake – but to be fair, the city pretty much runs on coffee and cake.

We took a particular route to the museum, to allow me to revisit a street of antiques dealers to buy a souvenir – which I did on my own, while R went ahead to get the coffee and cake in. As we separated I said that if I didn’t join him within quarter of an hour he could assume that I’d been run down by a bicycle, and feel free to eat my cake. I managed not to be run down, but it was a pretty close-run thing (see the first extra); even after four days of practice I was still finding bicycles harder to dodge than cars and trams. 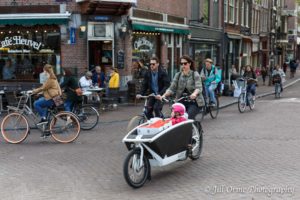 The souvenir is a C17th Delft tile.

So, yes – you guessed: we’ve been in lovely Amsterdam. Staying in a hotel on Singel, which is the innermost of the semi-circular ring of canals (having been the moat of the mediaeval city), and running up fabulous bills – it’s not a cheap holiday location. But we’ve had a wonderful time, seen some fascinating things, eaten excellent food, and walked ourselves to the point of complete exhaustion. Many, many photos were taken, and some will be back-blipped over the next few days.

The Delft tile will probably also be blipped at some point; and so, I would imagine, will the reproduction tulip pot I also managed to acquire this morning. R, who covets a life of minimalist simplicity and has almost no interest in ceramics of any kind or period, was remarkably tolerant of the whole enterprise; it may have helped my case that the tulip pot I actually bought is only about 10″ tall, when he’s in no doubt that I wanted the one I photographed on the bar of the Rijksmuseum café…. 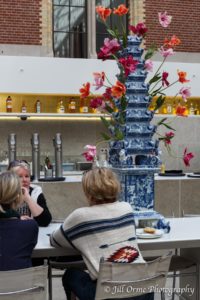 * Rembrandt is buried in the Westerkerk, though the fact is only marked by a plaque on the wall, because the exact location of his grave is unknown.