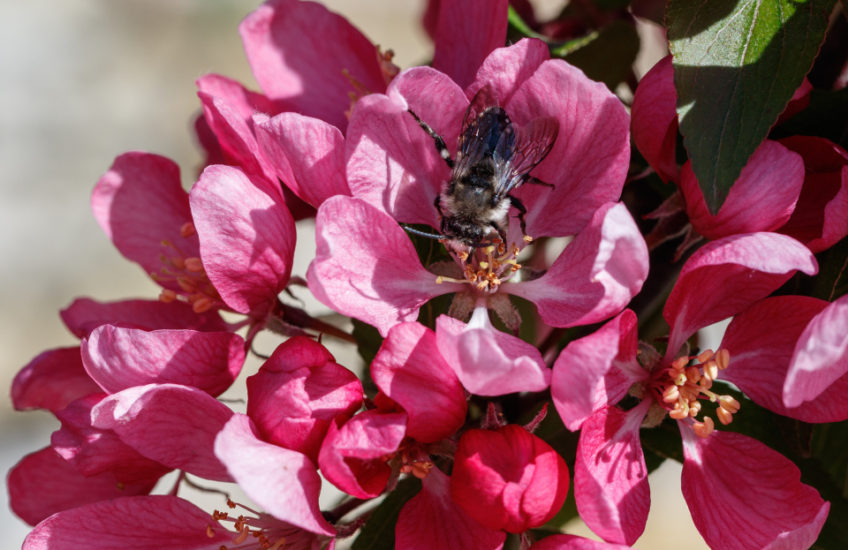 Hark at me, anthropomorphising again. It’s not wicked of course, though its habits are reprehensible. This is Melecta albifrons, the Common Mourning-bee, which is a cleptoparasite of our lovely friend Anthophora plumipes, the Hairy-footed Flower Bee. Instead of setting to and doing some work itself, M. albifrons lays its eggs in an A. plumipes nest, and its larvae eat the pollen left by the A. plumipes queen before her eggs can hatch. I’d better stop talking about this now, before I start drawing political parallels.

Melecta albifrons is very striking, and despite its superficial similarity to Andrena cineraria it’s quite easy to differentiate, being larger and having those rather dramatic tufts of white hair along the sides of its abdomen. Because it doesn’t collect its own pollen, the females have no pollen baskets, so it’s not particularly easy to tell the males and females apart – the females are larger than the males, but that doesn’t really help if you only have one individual to look at.

This one was feeding on the column crab apple tree Malus ‘Red Obelisk’ which we planted three years ago by the yard wall, and which has been delighting us with this spectacular display of blossom since we arrived home from Amsterdam. On the subject of which, if you’re interested but haven’t already seen it, I’ve back-blipped Amsterdam by night.