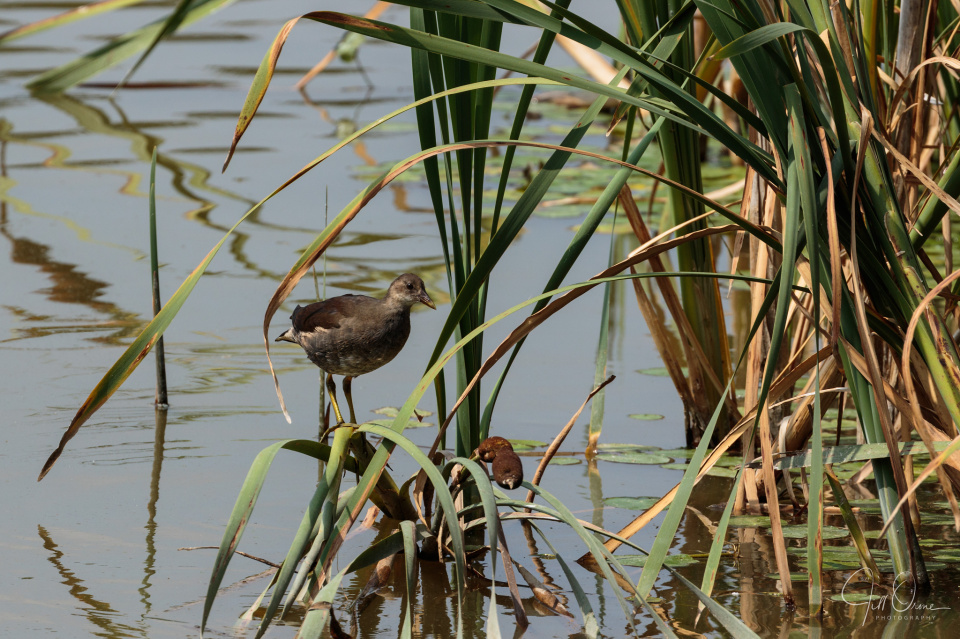 Walking past one the other day, I said to R, “Why is it ‘bald as a coot’? They’re not even slightly bald.”

This evening, checking to see whether today’s juve was a coot or a moorhen, I found out: it’s a moorhen, because if it were a coot, by this stage it would be developing the white shield at the top of the beak which is… bald. So there you go – another mnemonic, to add to my standard one (which only actually works with adults) that moorhens are moor colourful than coots. I could, of course, try simply remembering what each one looks like, but I fear I’ve reached the age now at which that might mean needing to forget something else, and it’s quite possible that the forgotten something else would prove to have been more useful.

Today was the day on which the temperature in our arid brown trench reached 34°C, and I went off to Upton Warren in the hope that the environment would be more pleasant. To my quite deep shock, the large, shallow salt water lake called The Flashes is now reduced to a rather small lake with a large salt flat surrounding it, and there wasn’t a bird in sight there. The freshwater section, called The Moors, is faring slightly better, but even there the water level is well below normal.

As well as the main lake at The Moors, there’s a smaller and quieter pool which I prefer because the hide is closer to the water, and that’s where I spent most of my time today. There were several male Brown Hawkers patrolling the reed bed, and I reduced myself to a soggy heap of frustration trying to get flight shots of them; it’s even possible that some unbecoming language was used at one point, but in the end I did succeed. Sadly, all of the focused shots were of their retreating backsides (I may have to start a new collection to go alongside my Bird Bums album – I shall call it Dragon Derrières), and I much prefer this confiding young moorhen, which seemed to spend as much time watching me as I did it.