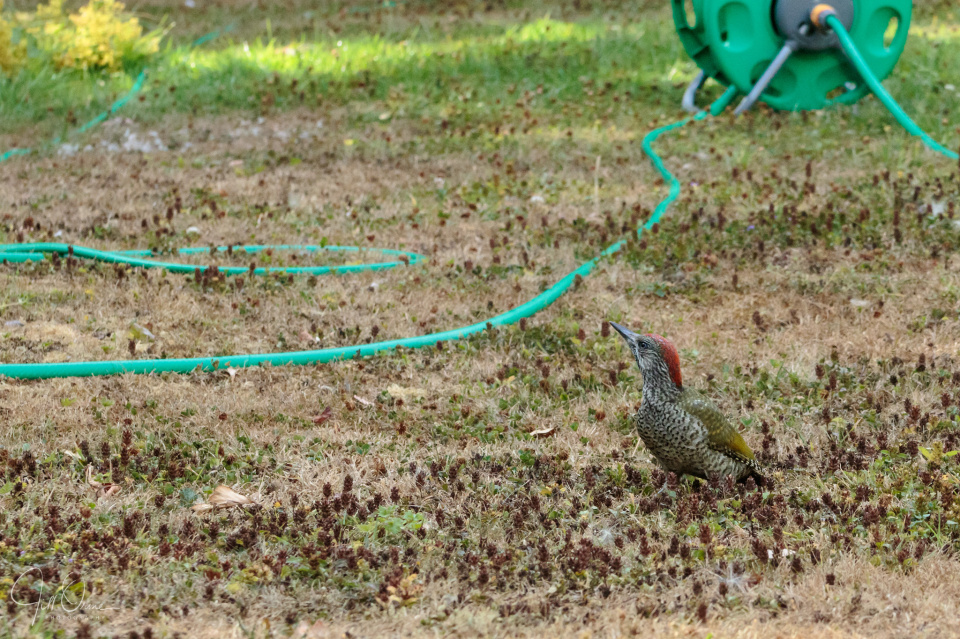 “Good evening, and welcome to another edition of Wrong Camera, Wrong Lens!“

So there I am, wandering around the garden with the 7DII and macro, looking for bugs, when suddenly there’s a loud squawking noise (unusual in an invertebrate), and this young male green woodpecker flies across the garden and lands under the apple tree, about twenty feet from where I’m standing. And I think Nooooo!!!!, because I’ve never been so close to one before, but he’s  between me and the house, and the chance of me sneaking past him to fetch a decent sized lens is zero. Less than zero.

So I sneak a few shots with the macro, but then something startles him and he flies up into the apple tree, which he proceeds to explore, while I stand rooted to the spot watching him. After a couple of minutes he flies away, complaining loudly, and I’m just about to resume my bug hunt…. when there’s another set of squawks, and back he comes, this time landing on the other side of me. I still daren’t move though, because these woodpeckers are very wary – as all ground feeders need to be – and though he’s now searching some of the large crevices that have opened up in the lawn, looking for ants, I’m sure that he’ll fly if I try to get to the house.

So instead I slowly sink down into a crouch, and keep taking photos. And over the next few minutes he gradually hops closer and closer, and I calculate that if he makes it over to this side of the hose he’ll be less than fifteen feet away, and even with a 90mm lens that should allow me a blippable shot. Which in the end is just what happens. And then finally, twelve minutes into our relationship, he suddenly decides that I am, after all, some kind of threat, and takes off into next-door’s garden with a great deal of fuss and flurry, leaving me almost open-mouthed about the encounter.

I was wearing, by the way, pale beige trousers and a vivid yellow t-shirt; and the camera was set to high-speed burst shooting, with the shutter noise not damped. So I have to say that he was either extremely stupid, or really quite remarkably bold – but either way, I’m not sure that I fancy his chances of seeing out the summer.

Oh, and – yes, this rather unappealing patch of brown scrub is what currently passes for our back lawn. Which, you’ll note, we haven’t been watering: the hose is there to try to save the life of our remaining flowering shrubs and perennials. We haven’t been cutting it either – it stopped growing about a month ago, and given that it crunches when you walk across it, mowing would seem more likely to set fire to it than anything else. We had been promised thunderstorms this coming Friday, but apparently they’ve now decided to go somewhere else. I can’t say that I blame them.