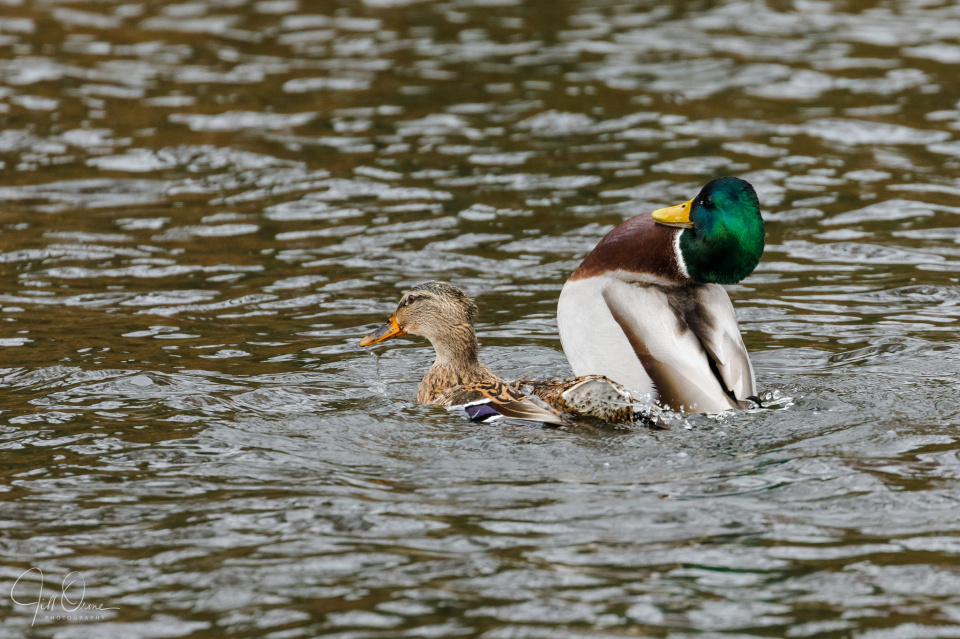 My second thought on seeing mallard lurve happening on the Avon this morning (after I wish they were closer, so I could get better photos) was that it surely can’t be the right time of year for this sort of behaviour. But on looking the matter up, I found that these ducks do start to pair up in the autumn, though they don’t actually nest until March.

Copulation between mallards has an unsavoury reputation, but this encounter was relatively decorous. Two drakes were competing for the duck’s attention when I first saw them, both dipping their bills rhythmically into the water; she watched them both for a few seconds, and then dipped her own bill – which in some way I didn’t understand seemed to be a signal to this drake that he was in luck. The rejected male left with good grace, and the victor mounted at speed. He did push her completely under the water, as you’ll see if you’d care to view the full sequence of my shots, but only for a couple of seconds, and then he dismounted and did this – well, to me it looks like a showing off move, but perhaps it has some other kind of social significance.

None of the descriptions I’ve looked at of mallard reproduction explain why the process starts as early as this, but it may be to do with the forming of a strong pair bond, because when this duck begins to lay she’ll produce around a dozen eggs over the course of a couple of weeks – an exhausting process for her – and will be heavily reliant on her partner for protection and for food. Once the clutch is laid the drake will start to lose interest in her and will drift away, joining up with other males and preparing to moult. It’s at this time that the males can behave very badly indeed, chasing any unattached female they happen across and committing what amounts to gang rape if they catch her; unlucky females submerged under a scrum of competing males sometimes drown.

If your interest extends to the physical details of mallard copulation, there is quite an interesting article here about the structural technicalities. But if you’re of a delicate disposition I’d leave it alone: I’m not even slightly squeamish, but even so it made me wince.