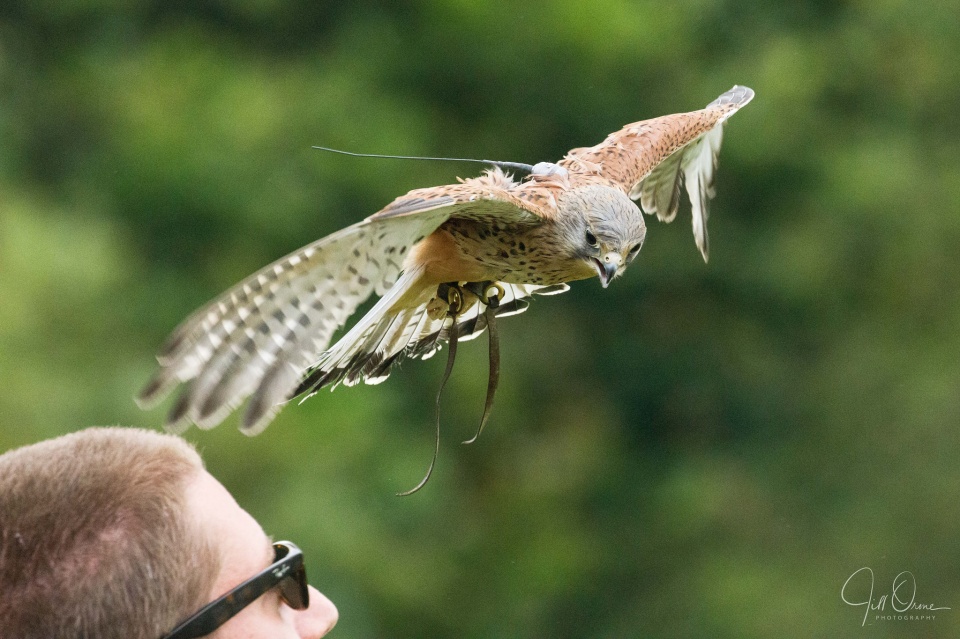 After spending the night in a hotel on the Carmarthenshire coast, R and I meandered back homewards today via the National Botanic Garden of Wales. This is a terrific garden, with lots of different zones and attractions, including the world’s largest single-span glasshouse – a (for me vertigo-inducing) structure of such complexity that they say it would have been impossible to design it without the use of computers. There’s a big lake, which by rights, on a less gloomily overcast day, should have been teeming with the Welsh dragons that continue to elude me; a tropical butterfly house; and the British Bird of Prey Centre, which puts on several raptor flying displays each day.

Over the years I’ve seen a number of falconry displays, but I don’t think I’ve ever enjoyed one more than this. We were introduced to a couple of the youngest residents, a kestrel and a long-eared owl, which are imprinted on the falconers who are raising them, and are now being taught to get used to crowds of people as well as to fly on request; then we saw a stunning display by a hobby, flying to a skilfully worked lure. The largest bird that was flown was a white-tailed eagle called Atlantis, enjoying a late career change after spending much of her life in a captive breeding programme (“If she seems to be flying straight at you,” said the commentator, “it’d be a good idea to duck,”); she was seriously impressive, and I’ve put a few photos of her here, if you’re interested.

But the nicest and most unusual thing was seeing a falconer walk down the path from the aviaries with this kestrel, called Meenie, hovering and fluttering alongside him, and chattering away as if sharing the office gossip. Meenie then proceeded to fly to a series of hand signals and whistles, including swooping in and out among the spectators, and repeatedly demonstrating the amazing hovering ability of this species. I thought of Photoshopping the satellite tag out of the photo, but I actually find it interesting that the birds can wear these devices without looking at all upset or inconvenienced by them – and this gear is a far cry from the bells the birds used to wear on their jesses, not so very long ago, in the hope that if they decided to go native their falconers would be able to track them down by sound.

I wish that the NBGW was a little closer to us, because it’s a great place to visit, but a bit too far away from home to become a regular favourite. We’ll definitely be back though, and hopefully before too long.