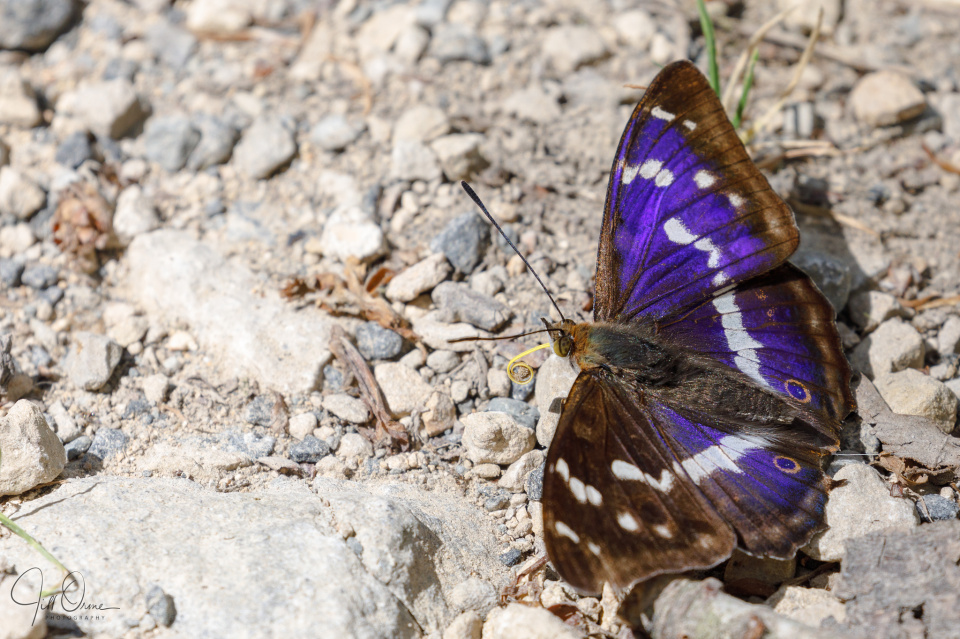 I was tired this morning, after all the gadding about and silversmithing(!), so I resisted the temptation to do a major road trip, and went back to Oversley Wood in search of butterflies. I arrived at 9am, meeting a chap who was on the same mission as we walked through the car park, and linking up with five others within the first hour. Many eyes make light work, or something like that.

The invertebrates, however, were not playing: I saw just two Purple Hairstreaks, chasing each other around an oak tree at far too great a distance for a photo, and no White-letter Hairstreaks at all. I had the pleasure of watching a couple of Southern Hawkers (or possibly the same one in two different places), a Brown Hawker, and a darter of some kind flying hunting circuits; but none stopped for a portrait, and I couldn’t get focus on them in flight against a busy background of foliage. By 11.30am, the best I’d bagged were a shieldbug nymph, and two quite nice hoverflies.

The car park chap gave up and left, and two of the others had walked on further into the wood, leaving four of us patrolling a couple of hundred metres of path. Dog walkers eyed us, some with amusement and some, frankly, as though we were mad. My back was hurting, despite heavy elastic strapping. I sat down on a verge, and wondered what the hell I was doing with my life.

And then…. he appeared. Teasing, skittish, settling briefly and then lifting and flying on, but finally coming to rest on the path and beginning to take up salts. The four of us walked towards him, silently, in a line abreast, cameras lifted. A bit like Reservoir Dogs….

It was half an hour and over three hundred photos later that I decided I probably had my Purple Emperor for the year, left the other three still following him up and down the path, and went home. It was a tough call, though, because if one of them posts a photo that I like more than this I will be very cross. But you have to draw the line somewhere – it wouldn’t do to look…. obsessed.