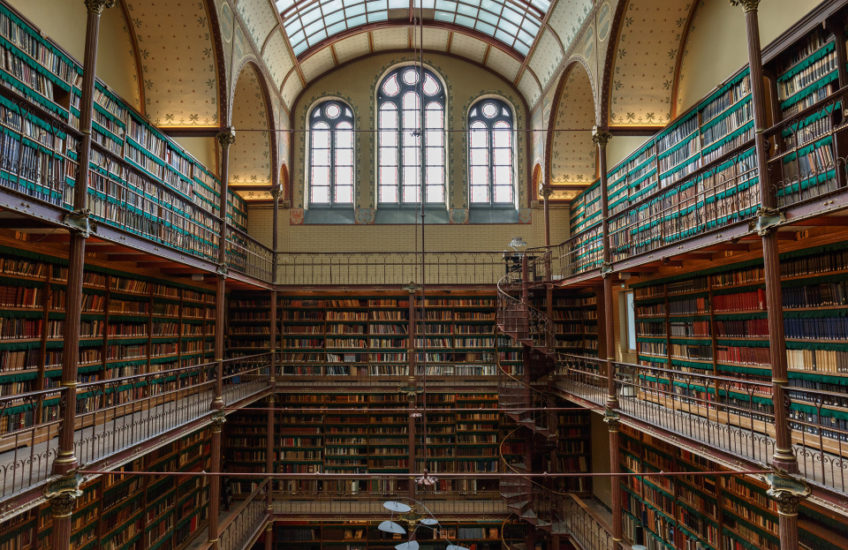 R and I spent a happy morning wandering around the Rijksmuseum – I didn’t see it before its lengthy and extensive refit, but it certainly is a beautiful gallery now. They’re happy for you to take photos of the permanent collection provided you don’t use flash, and I have around a hundred files to process from our visit, but they’re mostly slow shutter speed crowd shots; I think I probably spent nearly as much time watching the other visitors as I did looking at the art.

The photo I’ve chosen to post to mark the day is of the museum’s library, which is a wonderfully enticing space. As an ordinary museum visitor you’re allowed into a little enclosed viewing gallery at second floor level, but as you can see in my first extra it’s a proper working library, with reading tables on the ground floor for people doing research, and a wonderful spiral staircase giving access to the upper floors. R has just pointed out that there also appears to be an odd kind of mobile – “like the things we used to make out of coat hangers when we were kids,” – but I think we should be charitable and ignore that. 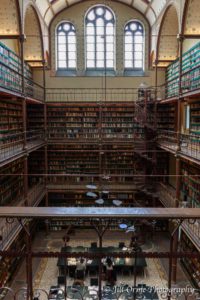 The second extra shows the choir of the Oude Kerk, taken, if you please, from up in an extended cherry-picker (and because the cherry-picker was swaying rather alarmingly, not perfectly sharp). This is Amsterdam’s oldest church, dating back to the C14th; it was, of course, originally a Catholic church, but was taken over by Calvinists in the C16th conversion of the Netherlands to Protestantism (an event the Dutch refer to as the Alteration). The Calvinists weren’t much fun at parties, and defaced all the art they could reach, which is why only traces now remain of the paintings which once decorated the pillars; neither were they as Christian as they might have liked to believe, given that they expelled the beggars who had traditionally found shelter in the church. Above the choir screen is an inscription which apparently translates as The prolonged misuse of God’s church, were here undone again in the year seventy-eight, which suggests that they were also pretty smug. 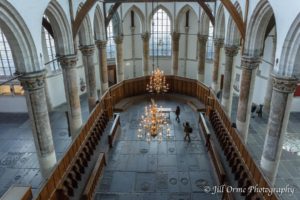 Today Oude Kerk is still used for both religious and secular events – the broken glass on the floor is part of a conceptual art exhibit – but to be honest we found it a rather sad place. The worst thing about it is that the main organ, which is said to be a masterpiece of the Baroque, is simply missing, with no explanation I could find as to why, and the gaping wound this has left inside the casing gives the central nave of the church an air of dereliction. There’s a tower you can climb, which is said to give a spectacular view across the old city, but R and I were touristed out by this point, and I was still a little weak at the knees from the cherry-picker, so we decided to go for a drink instead.

After a quick wash and brush up back at the hotel, we went for dinner at a tiny basement restaurant called de Struisvogel, on Keizersgracht. If you know what a struisvogel is, you’ll be able to work out what we had for our main course – and jolly nice it was too. Vegetarians should look away now.