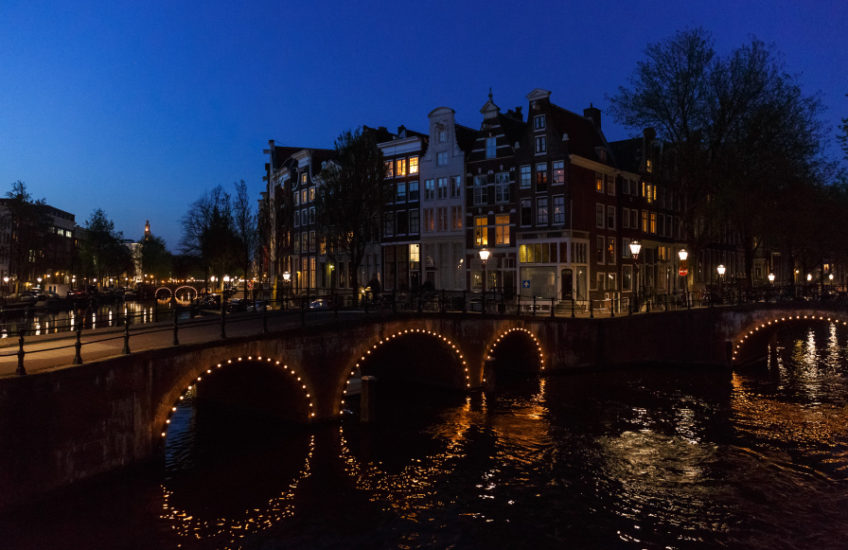 There are places I can imagine going to, and arriving feeling grateful that the journey took a mere nine hours – but Amsterdam isn’t one of them. We left Worcestershire just after dawn in brilliant sunshine, and had a good drive down to Heathrow; but shortly before we turned onto the M25 we hit a patch of thin fog, and when we checked in at the airport we were told that the flight would be delayed because our plane had been held up in Scotland by bad weather. Luckily, we’d decided to fly Business class (which isn’t our usual practice), so we were able to loll about in the BA lounge and eat several complimentary breakfasts, while the promised 40-minute delay stretched to an hour and beyond.

Even after we’d boarded there were further delays, firstly in being given a take-off slot and getting away from the stand, and then thanks to the plane in front of ours in the taxiing queue breaking down – so again we were lucky to be sitting at the front with plenty of leg and elbow room, rather than in our usual Cattle class seats further back. By the time we did finally take off for the hour’s flight to Amsterdam, I wasn’t at all sure that it wouldn’t have been quicker to drive. Did I mention that I hate flying?

The rest of the journey was uneventful, if you ignore the incident in which a young man somehow contrived to get the wires of his personal headphones tangled up in one of the buckles of my backpack. Don’t bother asking how, because I didn’t see what happened – the first I knew of the fact that we were lashed together was when my forward progress came to an abrupt halt, as several witnesses grabbed me and the bag and made competing and largely unhelpful efforts to disengage us. I initially assumed that I was being mugged (especially as R was separated from me by this group of people), and reacted with appropriate prejudice, but once I realised what the issue was I managed to stop the helpers helping, and sorted the tangle out myself. By this time I was quite stressed, and quite tired, and R must have wondered whether it wouldn’t have been more restful to have stayed at home and worked.

It was 5pm when we eventually made it to the hotel, so by the time we’d checked in and unpacked the day was largely gone, and there was really only time for a stroll along the canals to de-stress and orientate ourselves, before the important business of choosing somewhere to have dinner.  We settled on an Italian restaurant called Pastini, on the corner of Keizersgracht and Leidsegracht, which not only serves excellent food (the chocolate tart was absolutely to die for), but is just the best place from which to do people watching – see the first extra, which I took through the window. 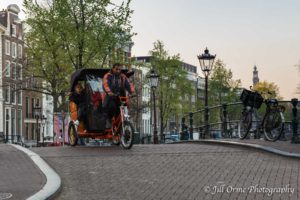 By the time we left Pastini it was getting dark. The bridges were prettily illuminated and many of the canal-side houses were also enticingly lit, and all the way back to the hotel R and I fell repeatedly in love with beautiful buildings and gorgeous views. The main image was taken outside the restaurant, looking across the junction of the two canals; Keizersgracht stretches away to the left, with the spire of the Westerkerk visible in the far distance, while Leidsegracht runs under the single-span bridge to the right of shot. 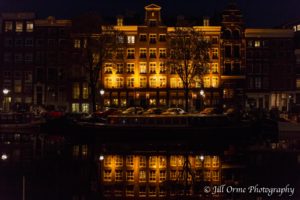