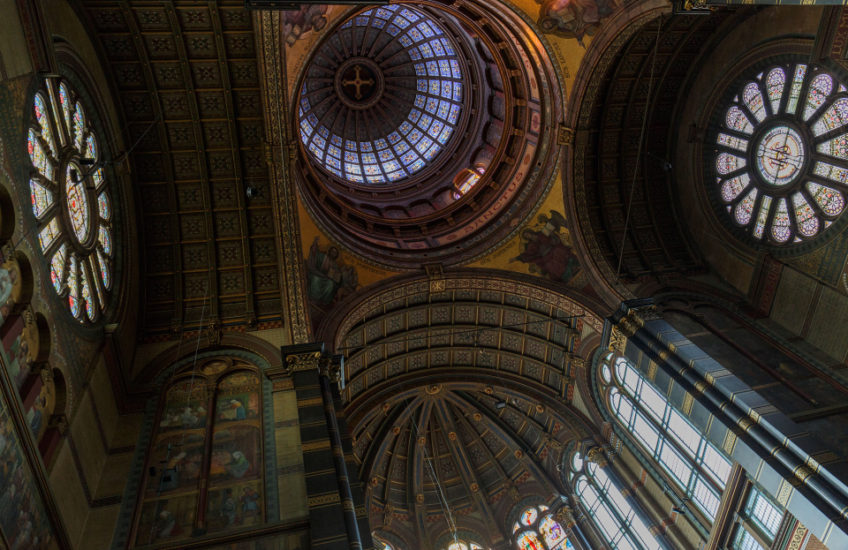 This was a day on which I wish I’d been wearing a step monitor, because I think I’d be able to feel pretty pleased with myself.

We began the day with a visit to the museum Ons’ Lieve Heer op Solder – which translates as Our Lord in the Attic – a C17th canal house with a Catholic church hidden in two of its upper floors. When the Protestant Reformation took place in the Netherlands all of its Catholic churches were forcibly converted, but the pragmatic Dutch authorities were prepared to turn a blind eye to the continued existence of the Catholic faith provided that those who followed the old religion did so privately. Thus a number of hidden churches were established across Amsterdam, of which this is the best-known, because it has been a museum since the Basilica of St. Nicholas was opened for Catholic worship in the 1880s. It’s a fascinating building, and the story is very well presented, but I wasn’t especially happy with any of the photos I took there.

We then went to take a look at the Basilica, which is massive, monumental, dark and frankly rather dour – if it were in Britain you’d probably call it a piece of high Victoriana. However, the arches, dome and apse are visually dramatic, and I was pleased with this image, which is why I’m featuring it today. The angle is slightly strange because I was lurking in the shadow of a pillar when I took it, trying not to annoy the worshippers who were gathering for the lunch-time service, but I quite like the effect and haven’t made any attempt to straighten it. I’m pretty certain it will look better full-screen, if you have the time.

Next, as the Basilica is close to the main railway station, we jaywalked across the tram lines to check out another famous, but this time secular, piece of Victoriana: the Grand Café Restaurant 1e Klas, at Platform 2B. I can happily report that the chocolate cake is excellent; and they have a parrot – which is noisy, but entertaining.

Fortified with cake, we then yomped down to the Rembrandthuis, the museum created to honour Rembrandt, in the house where he lived during his most successful years. He was an extravagant spender and eventually went bankrupt, so the house and its contents were auctioned off and he ended his life in modest rented rooms; but the interior of the house has been restored to the way it looked in the mid-C17th, using the evidence of his sketch books and the auction inventory. The place was absolutely heaving with people, mainly parties of school children, but even so it was extraordinary to be able to walk through those rooms and imagine Rembrandt and his family there. The adjoining building, which houses an archive of Rembrandt’s work, is also currently hosting a very interesting exhibition by the British painter Glenn Brown.

It was mid-afternoon by the time we left the Rembrandthuis, but we had the bit firmly between our teeth by this stage, so we took off along the canal ring at an extended trot and made it back to Dam Square, which we’d first passed through six hours earlier, in time to visit the Nieuwe Kerk. This C15th church was also converted during the Reformation, but it doesn’t suffer from the sense of desecration that I experienced in the Oude Kerk. It’s no longer used for services; these days it’s an exhibition space, and the beautiful organ is used for recitals. I was very taken with the stained glass windows, which are extremely unusual, and I was lucky enough to catch one of them in some nice light – so that photo is today’s extra. 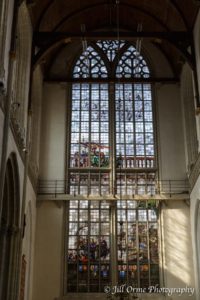 After all of which (plus a stroll through the Begijnhof, which is probably the nicest social housing I’ve ever seen anywhere) we were as tired as you must be by now, so we dived into a reviving Aperol spritz and then had a hearty meal at the traditional restaurant Haesje Claes. Delicious and nutritious – and well-deserved after our tourist marathon!