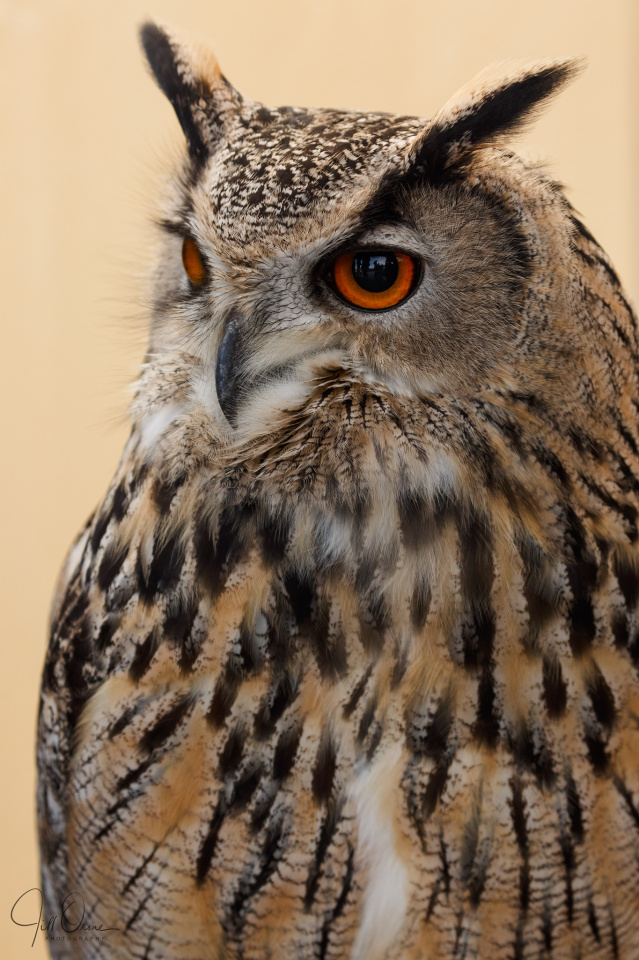 R and I were in Stratford at lunch time today, running errands, and I was happy to see the Midlands Birds of Prey Rescue stall in the market on Waterside. This is the smaller of the the two Eurasian eagle owls they take out on their fund-raising visits; he’s 18 years old, and is called The Jogger because he doesn’t like to fly very far, and prefers to trot along behind the humans at the sanctuary. He was rescued at the age of 6 weeks from some travellers who were abusing him, but over the years has become trusting enough to be taken out in public – as ever, there was quite a crowd of interested onlookers around the stall, and he seemed totally calm when people approached and stroked his breast feathers.

This afternoon I drove over to Murcot, near Broadway, to see if there was any sign of the starling murmuration I photographed a couple of times last winter. As dusk fell, groups of starlings (as well as some fieldfares and redwings) gathered chattering in the trees on the north side of the road, and for a while it looked as though they might put on a display; but in the end they flew southwards into their roost in small groups of between one and two dozen birds, and though several of these groups performed the wheeling and spiralling manoeuvres of a murmuration, there simply weren’t enough birds to produce those patterns that look as though they’ve been drawn with a Spirograph.

Despite the starling display never quite getting into gear, I was completely happy standing in the field in the gathering dusk: the sunset sky was a beautiful confection of gold, aqua, lavender and rose, and when the mackerel cloud above my head reflected the light at the horizon and turned crimson, I caught myself laughing aloud in sheer pleasure. A 100-400 lens isn’t an ideal instrument for portraying skies, but I liked this pink and blue shot of one of the small starling flights. I’ll definitely be back at Murcot soon to check on the murmuration, and the next time I go I’ll try to remember to take a second camera with a wide-angle lens. 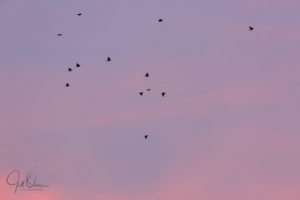