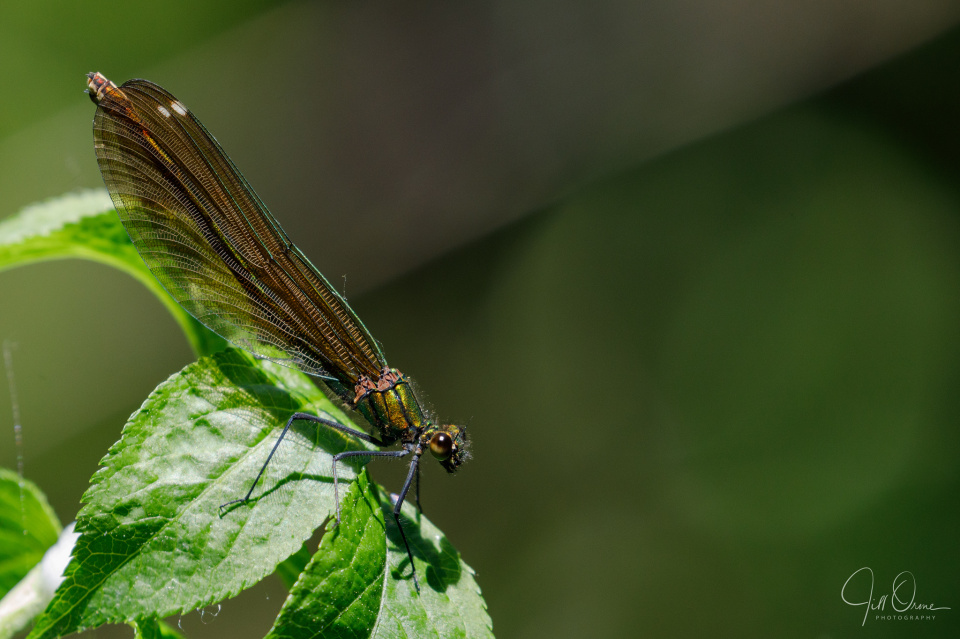 This morning I went back to the far end of the garden, to look for yesterday’s new friend. He wasn’t there, but almost at once I spotted a female demoiselle. She was quite high up in a willow tree, and once again I had to use the large lens to get a good look at her, but when I did I was confident that she too was a Beautiful Demoiselle.

In order to get nearer to her I went through the gate in our fence and out onto the bank of the stream, where I nettled myself quite badly, and then found that in decreasing the distance between us I’d made my shooting angle considerably worse. I was about to retreat, grumpily, to the garden, when a metallic shimmer moved through my peripheral vision, and this second female landed on an elder sapling a few feet away from me. We spent the next three quarters of an hour together, she hunting and snacking, and I taking hundreds of photos from every angle I could achieve; and it was especially nice that R came to bring me a cup of tea during our photo shoot, and was able to admire her too. When eventually I decided to leave her in peace she followed me to the fence and carried on watching me as I walked away.

Females of this species are much more difficult to tell from Banded Demoiselles than their male counterparts, but Beautiful females have bronze rather than green wings, and the white pterostigma, or wing spot, is further down the straight fore edge of the wing. Here’s a female Banded Demoiselle I took last year, for comparison. Both images would benefit from being viewed full-screen, if you have the time.