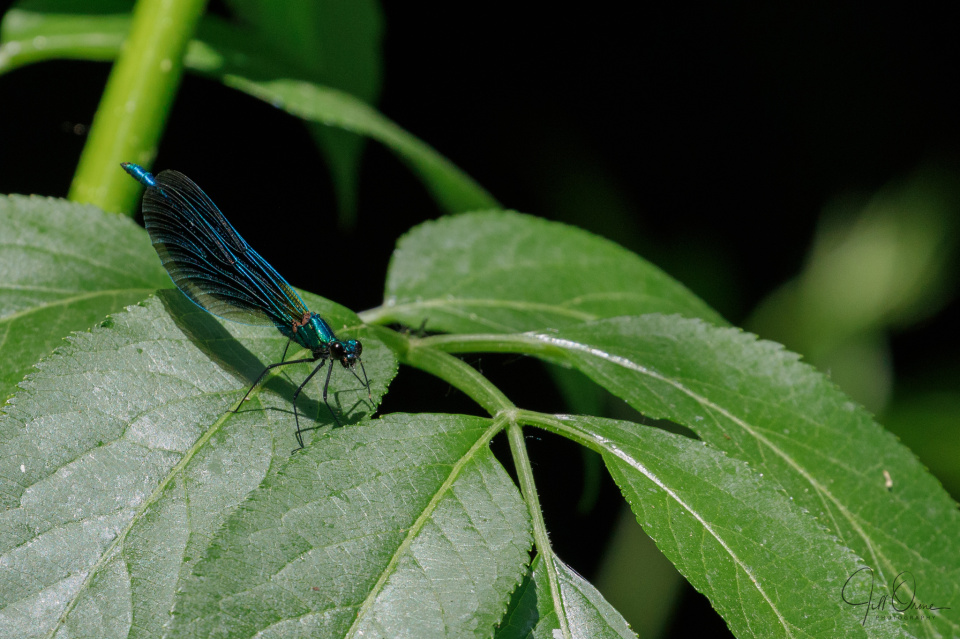 “Starter for ten,” I said, interrupting R in his study and thrusting my camera under his nose. “What’s this?”

Peering at the screen, he replied, “It’s a…… Beautiful.”

It is indeed a Beautiful. Which just goes to show two things:

1. It’s not possible to live with me without being at least a little tainted by my obsessions; and

2. His memory isn’t as bad as he likes to make out that it is.

Ever since I first learned about Beautiful Demoiselles I’ve been slightly aggrieved that I’ve had to drive half way across the Shire to see any, given that we have the perfect conditions for them right here in the trench. Brooks and Cham say: “A damselfly of fast-flowing, clean, pebble- or sandy-bottomed streams, often in heathland or moorland. It is more tolerant of shade than the Banded Demoiselle.” This valley is far from any heath or moor, but it has a shady brook running through the middle of it, forming the end boundary of all the gardens in the central loop of the village, and in which Banded Demoiselles breed – but never before today have I ever seen a Beautiful.

I was down at the bottom of the garden this morning checking the butterflies and hoverflies that like to hang out around the bank of the stream, and when I saw a handsome male demoiselle I immediately assumed him to be Banded, and snapped a couple of distant record shots with the macro. When I looked at the back of the camera and saw that his wings were block-coloured I went through a series of mental contortions – first trying to convince myself that I was right and they really were solid, then doubting my own vision and managing to decide that I actually could see bands after all, then doubting that too, and finally realising that I was Going to Need a Bigger Lens to settle the question. I put down the small camera to mark the vantage point, tiptoed gingerly away until I thought I was out of startling-a-demoiselle-into-flight range, then scuttled back to the house, grabbed the big gear, scuttled back again to about five metres from the fence, and tiptoed the rest of the way to the spot from which I’d seen him. He was still in the same place, and about a hundred photos later I was certain: he’s Beautiful.

After sharing this rare piece of good news with R, I spent most of the rest of the day sitting by the wild pond, reading, and feeling as pleased with myself as if I’d moved a Beautiful Demoiselle into the village personally. I went back to the brook to check on him a few times, and he was still there – until he wasn’t – but even if I never see him again, he and I will always have shared this special moment.