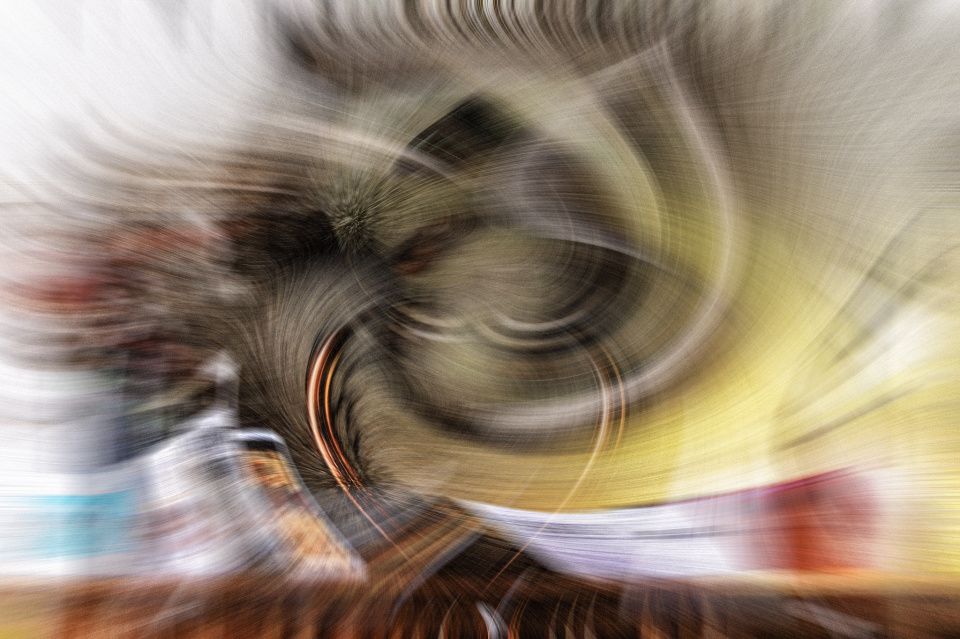 Thanks to everyone who posted good wishes for R’s birthday celebration today. We have had a lovely family day, and I think that so far he’s finding being 60 pretty much like being 59, but with more presents.

As the Big Birthday happens to fall on Abstract Thursday, I thought it would be nice to create an image from the birthday cards on the hall dresser – you might think it represents the viewpoint of someone who started the day with Bucks Fizz and finished it floating in single malt, but I couldn’t possibly comment.

The technique I used for this shot has been hugely popular recently in a couple of Facebook photography groups I belong to. It involves using multiple filters in different layers – the Photoshop tutorial is here, but I made this in PSE without any difficulty. I actually created several different images from the same photo – starting by following the tutorial exactly, but then trying various modifications to see if I preferred them. For this one I centred the radial blur filter differently on the two layers, and then twisted them differently as well.

I should warn you that if you’re thinking of trying this out, you should set aside several hours – it’s ridiculously addictive. Luckily I had the time to spare, because I was hiding from the sight of R and the Offspring cooking. In my kitchen. I know – it’s the stuff of nightmare. But it only gets to happen once every decade or so – normal service will be resuming tomorrow.

No, I don’t know why. But after much anxiety, and consulting of me and the interweb (and a certain amount of abuse being directed at one Mr P. Hollywood) they actually turned out pretty well. That may sound half-hearted, but given that I don’t like crumpets it actually counts as a ringing endorsement. I’m trying not to think about the fact that there was mixture left over, and that something straight out of Quatermass is now happening in the fridge…..