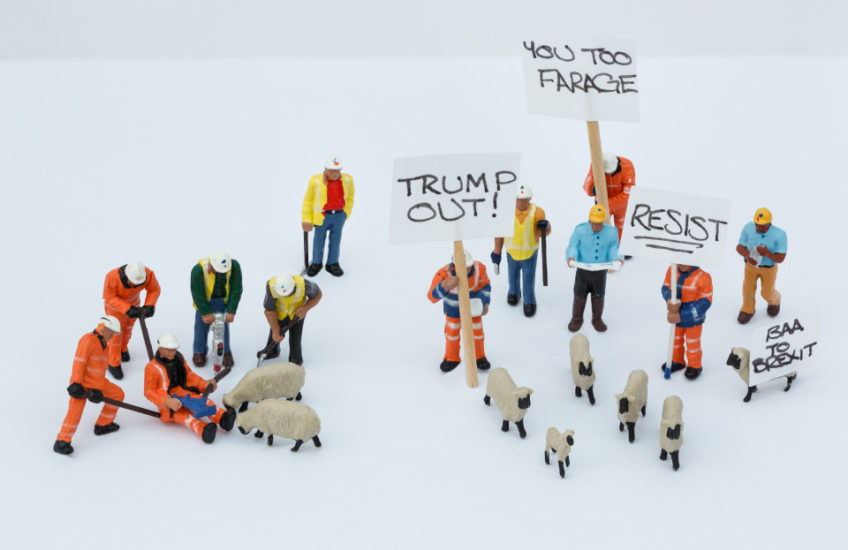 The Bachmen held a meeting this morning to discuss the current political situation in the United Kingdom and the USA, and decided that it was important for them to add their voices to the protests already staged in both countries. There was some initial disagreement about the precise focus of their protest, but eventually they decided to march on a broad internationalist and anti-totalitarian platform.

The only dissenting opinion voiced in the meeting was that of Sitting Down Bloke, who said that protest marches achieved nothing and merely upset other people. Theodolite Guy retorted that it was unsurprising that Sitting Down Bloke didn’t want to march, as he had never been known to do anything other than sit on his backside watching everyone else work. At this point Sitting Down Bloke described his colleagues as “Sheeple”, and the meeting had to be adjourned temporarily to allow the sheep to have a private discussion about what some of them felt was an ovinist incident. However on their return they stated that they had elected to treat the use of the word “Sheeple” as complimentary rather than insulting, and the meeting proceeded to a vote, which was overwhelmingly in favour of the protest action.

Following the production of signs, a debate about the correct spelling of the word “Fascist”, a further slightly heated discussion as to the appropriateness or otherwise of the use of metaphors involving genitalia, an altercation over the use of the phrase “Theresa the Appeaser”  (which Theodolite Guy considered witty and eye-catching, but which the sheep felt was an unhelpful ad hominem attack), and the re-production of correctly spelled signs with most of the insults removed, the march began. The sheep, as was their wont, led the way.

Sitting Down Bloke was still angry at the way the meeting had turned out, and held a one-man sit-down protest at what he described as the negativity of the event: putting the country down was stupid, he said, and insulting the Leader of the Free World, who was one of our most important allies, was dangerous at a time when we were about to separate ourselves from Europe. Some of his colleagues took strong exception to this, and subjected Sitting Down Bloke to a physical attack; at which point some of the sheep – who despite their ideological differences with him had always had a strong anti-bullying agenda – went to his aid. Their lack of opposable thumbs made it impossible for them to offer practical assistance, but their moral support was much appreciated by Sitting Down Bloke, who by now was rather sore.

The protesters marched all the way from the dining room to the kitchen, where they held a rally. The event was variously described by them as “uplifting”, “energizing”, and “better than being at work”, and was deemed to have been a huge success, being marred only by the discovery during the rally that The Slattern had eaten all the biscuits.

Results of The Slattern’s on line researches today, when she should have been doing something useful:
Tweet of the Day: Caitlin Moran
Thing I Don’t Want To Be True of the Day: Andrew Sullivan on Plato
Sympathetic snicker of the day: Hannah Dunleavy

And finally, song-I-can’t-get-out-of-my-head of the day: The End of the Innocence. Though I would posit that the reason armchair warriors often fail is less to do with fairy tales and more to do with developing DVTs from sitting in their desk chairs for ten hours at a stretch. Just saying.