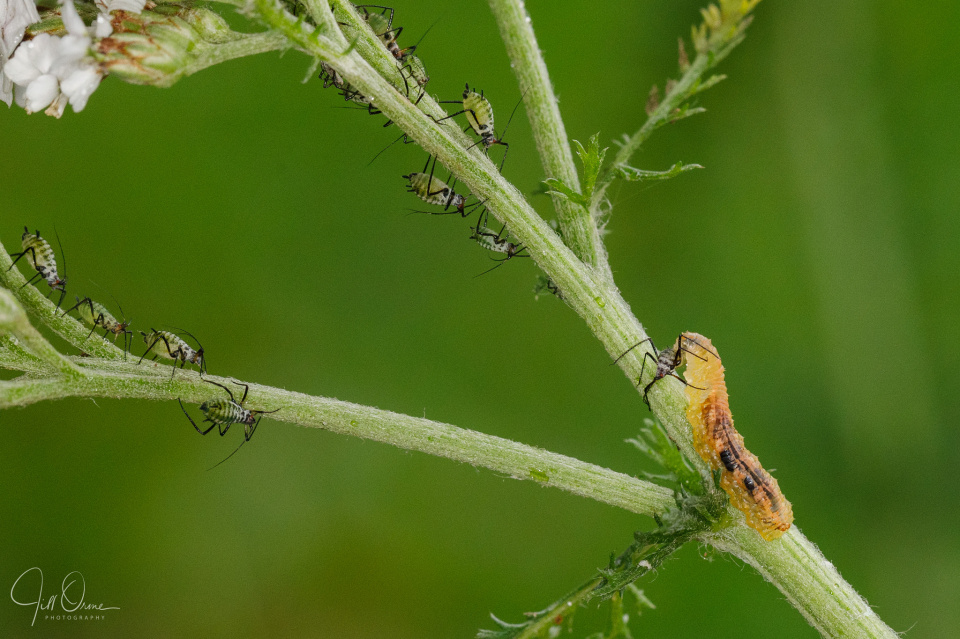 In the last couple of days the ladybirds in my garden have looked rather overwhelmed by the thousands of aphids currently massed on the yarrow. Now though, there are some new predators in town, and these ones really are eating machines. Whatever tricks the aphids are able to pull to protect themselves from beetles don’t seem to work at all on hoverfly larvae – this larva (which I’m told is one of the Syrphus species) had left a trail of aphid limbs in its wake as it cut a swathe along the stem. As you can see, the aphids are on high alert, but I don’t think that will help them much.

(You could almost think of it as Marshall Blucher’s Prussians arriving late in the afternoon to relieve Wellington’s exhausted army at Waterloo. Or not. It’s not compulsory.) 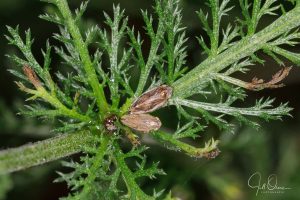 The main news of the day is that I’ve (sadly) accepted that the dragon season here is over, and R and I have covered the wildlife pond to keep it clear of leaves and other debris. Last week R made a wooden frame that’s bigger than the surface area of the pond and higher than the tallest plants, and hammered it in position. Today we stretched netting over it and pinned it down with a combination of pegs and stones – but leaving an open tunnel that we made from a couple of cut logs, so that amphibians can get in and out. The wild garden is edged by mature trees, and last winter I spent a ridiculous amount of time clearing fallen leaves out of this pond so they didn’t foul the water. We hope this cover will be more effective solution, and save me a lot of tedious work. And I’m already thinking about how good it will feel to remove it in the spring.