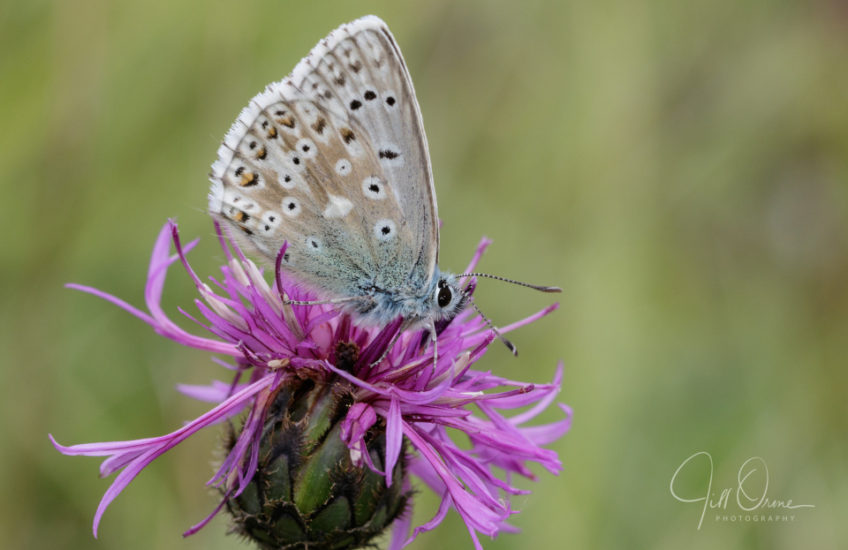 I have two offerings for you today, from  Prestbury Hill Butterfly Reserve, just north of Cheltenham. When I realised this morning that we were in for a decent day, I immediately began calculating where to go for a chance of photographing something I’d never seen before; and after contemplating several sites and dismissing them all for various reasons, I suddenly remembered that I hadn’t been to Prestbury since an unsuccessful trip early last season, when I found only two butterflies and nearly came away with hypothermia. I decided that today was the day to give the reserve a second chance.

Prestbury isn’t the most straightforward of places to find unless you know the area well, and zooming off with the car top down, I missed a crucial turn on my satnav because I couldn’t see the screen properly for glare. I then wound up being taken via a single-track route that would have been gloriously scenic if someone else had been driving me in a 4×4, but which, driving it myself in a little roadster which has already demonstrated itself to be an idiot magnet, put my heart in my mouth for most of the last five miles. Luckily the brakes on the MX-5 are effective, and with only a few emergency stops I made it to the top of the hill, parked up, and tottered away from the car on jelly legs.

Two hours later, after hiking around both sections of the reserve, I tottered back on even jellier legs, pink in the face and swatting like a mad woman at a cloud of large flies which had decided to adopt me, but pretty satisfied with what I’d seen and photographed. My butterfly species count for the day included Small Copper, Meadow Brown, Gatekeeper, Peacock, Brimstone, Small Skipper, Common Blue, Chalk Hill Blue, and Small Tortoiseshell; plus there was one other huge specimen that floated over my head but disappeared into a fenced area before I could get focus on it, and which I think (from its size) must have been a Dark Green Fritillary. There are other species listed for this reserve which I didn’t see – notably at this time of year the Grayling and the Wall Brown, but those are both rare enough that I wasn’t really expecting to find them anyway.

My main image today is a male Chalk Hill Blue, which is a first-timer for me and was therefore one of my principal target species for the day, and which I found in good numbers. This one was resting, and calm enough that I was able to kneel down and photograph him from very close, and then get up, walk round to the other side of the plant, and repeat the procedure.

My extra is a Burnet moth nectaring on scabious, though it took me a few photos to be sure of that because it’s so ancient that its wings have become almost transparent. I think I can see six spots – and on the principle of common things being commonest it is most likely to be a Six-spot Burnet – but I can’t fully rule out the possibility of it being a Five-spot. Either way I was very happy to find it because it’s only the second time I’ve ever seen one, and I think they’re beautiful. Decrepit and bedraggled as it is, there’s still a kind of magnificence to it, which puts me in mind of a character in The Lord of the Rings, or maybe Game of Thrones. 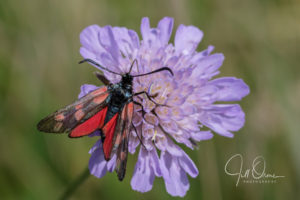 This evening R and I went out for dinner with Child Two, who is currently in residence because he’s teaching at a week-long summer workshop in Stratford. We don’t see him nearly often enough, so took the opportunity to grill him mercilessly about everything he’s up to, but I must say he stood up to the interrogation remarkably well.