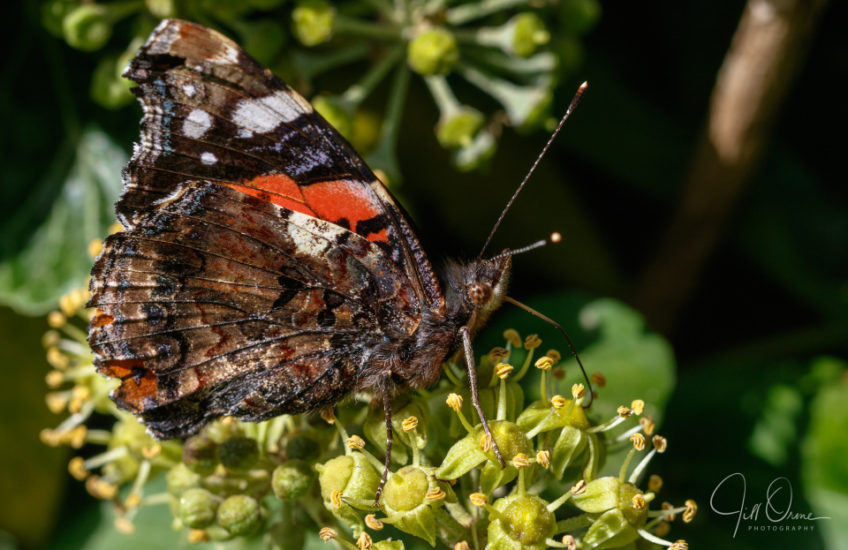 The flowering ivy really is the gift that keeps on giving: today when I visited it, this hedge was playing host to half a dozen Red Admiral butterflies, as well as a host of bees, flies, and hoverflies. I also found some ladybirds, including a 2-spot, and the sweetest, tiniest jumping spider – if it had let me take a full-face portrait, that would definitely have been my blip today, but sadly it was camera-shy and I only managed record shots.

I had to kneel down on the verge to get a good angle on this Red Admiral, but I think it was worth it: the patterning on the underwings is quite beautiful. I suppose that it evolved as camouflage, but it somehow seems too intricate a design to be simply about passive defence. Having stitched  a good few cushions in my time, it puts me in mind of needlepoint.

There’s some debate about the life cycle of the Red Admiral. It’s primarily a butterfly of southern Europe and North Africa, with the first brood to emerge each year having a strong instinct to migrate northwards, and the received wisdom used to be that all specimens seen here in the spring were immigrants, and these autumn flyers their offspring. However, over recent years the belief is taking hold that the butterfly is now resident in southern England, and that at least some of the second brood will overwinter. Some people say that they attempt to hibernate, but aren’t on the whole very successful at finding sheltered enough places; but other scientists seem to think that they simply become less active during the winter; when it’s cold they sit around in whatever shelter they can find, and on warm and sunny days they perk up a little and go in search of food. That wouldn’t seem to be the best strategy for getting through the a British winter, though it probably works perfectly well in the Mediterranean, and one would have to assume that the attrition rate is very high. But it would certainly explain the fact that in the warmest and most sheltered bits of the country the Red Admiral can be seen on sunny days at any time of year.