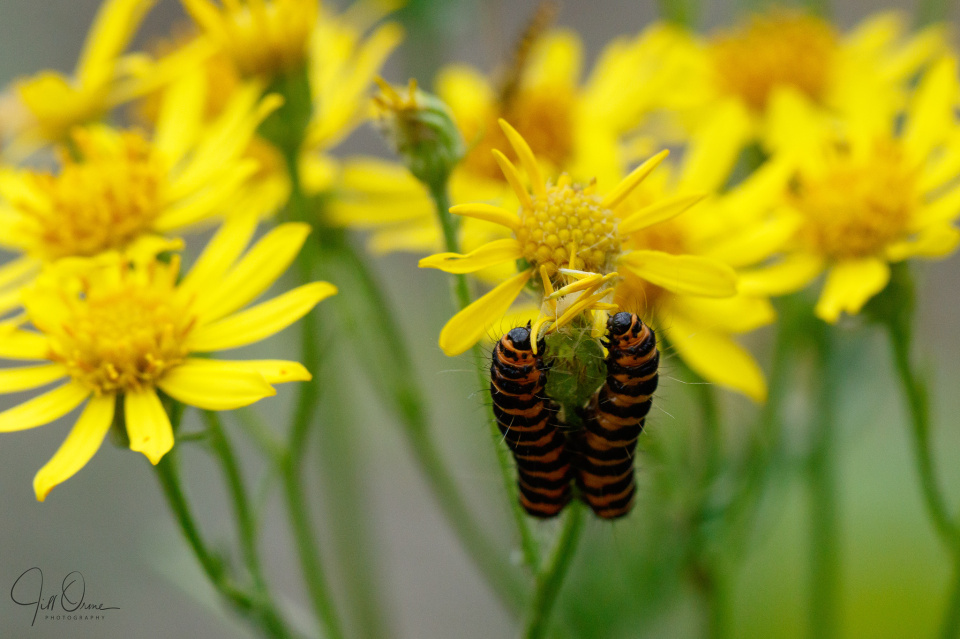 I hate to moan, as you know, but it’s not really feeling much like high summer at the moment. Today was cold, windy, and largely wet, with a distinctly autumnal atmosphere, and after bowling around the garden for fifteen minutes or so I was beginning to despair of finding anything at all worth photographing, when I remembered that I’d found some Cinnabar larvae yesterday, on a self-seeded ragwort plant in the yard where we park the cars.

The Cinnabar moth is named after the mineral, because of the red patches on its wings. Both the moth and its caterpillars are unpalatable, due to toxic alkaloids that the larvae absorb from the ragwort which is their principal foodplant, and they advertise the fact via their bold colouring: with the possible exception of cuckoos, which don’t care, most birds learn very quickly to avoid eating the Cinnabar.

The caterpillars start out quite pale, during which phase they tend to remain on the underside of the leaves, but as they grow (and become more poisonous) they take on this characteristic orange and black livery and become very bold, moving all over the plant and feeding voraciously. A batch of larvae can easily strip a ragwort plant of all its leaves and flowers, and if there are no other nearby plants to which they can migrate they will sometimes turn cannibalistic and eat each other, in an attempt to survive through to pupation. I’m happy to say that this pair were feeding quite peaceably next to each other, and that there appears to be enough of the plant left to support the two dozen or so good-sized caterpillars I counted today.

Apart from this brief foray into the garden, I spent almost the whole day in the kitchen, preparing food for a family get-together this weekend. I’m quite tired now, but I’m confident that the effort I put in today will spare me a lot of work later, and allow me to relax and enjoy having my little crew around me.