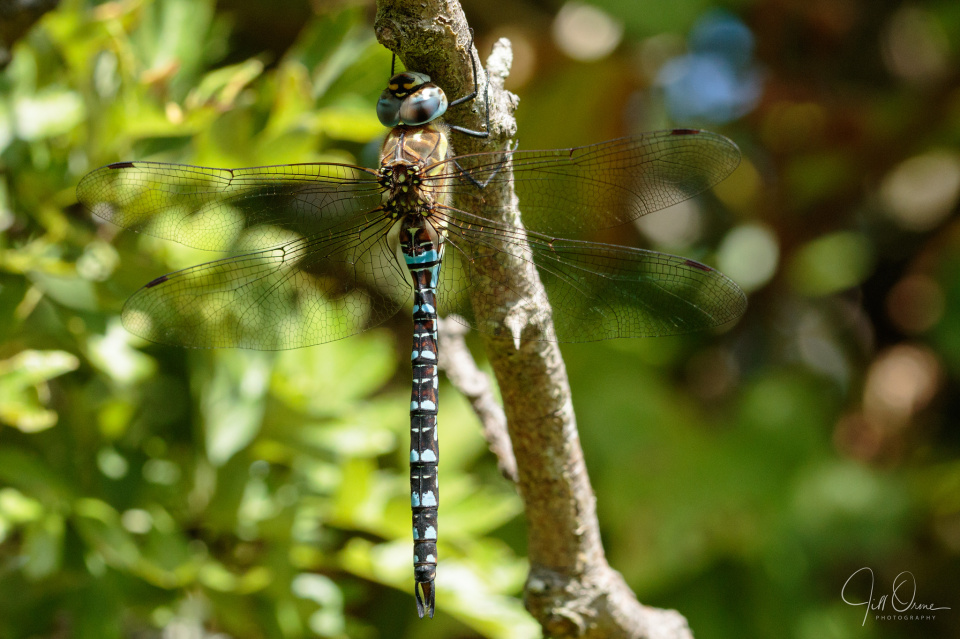 I was searching the lower slopes of Prestbury Hill butterfly reserve this afternoon, when I was distracted from my “collection” of Blues (various) by the arrival of this dragon, which landed on a scrubby hawthorn in the middle of a large bramble patch. As I was travelling light with just the 7DII and macro, I had to decide if it was worth wading in after him; I was wearing thin trousers and a t-shirt, so the idea wasn’t enticing, but on the other hand he looked to be a Migrant Hawker, and I hadn’t photographed one of those yet this year…. so I chose the least worst route, and strode in.

Given the scratches I sustained, and the irritation of having been watched by a passer-by as I extricated myself from the brambles (if I’d expected to be that entertaining, I’d have sold tickets), I’m happy to confirm that this is indeed a male Migrant Hawker. The features I saw in the field were his paired abdominal spots (in the Southern Hawker the distal three pairs are fused into stripes) and an faint overall lilac tinge, especially around the eyes. He’s also slightly smaller than a Southern Hawker, being about 6cm long, and the yellow golf tee marking at the top of his abdomen, the brown wing spots, and the long anal appendages are also diagnostic.

Migrant Hawkers are now resident in the UK, although their numbers are boosted by mass migrations from the Continent in some summers. Their larvae develop much more quickly than those of some other dragonflies, but can’t survive low temperatures, and it’s thought that this is the limiting factor in their steady spread northward. Males are territorial, though less aggressive than some other hawkers, and they’re more likely than other species to be found basking in the sun like this. They have quite a long flight season, emerging at the end of July and surviving well into the autumn.

I was more than usually happy to have caught my dragon, because most of the butterflies at Prestbury were behaving really quite badly today. All the Blues (Common, Chalk Hill, and Small) and the Small Coppers were very reactive and flighty, and I struggled to get photos of any of them that I was pleased with. I didn’t see a single Dark Green Fritillary until just before my foray into the bramble patch, when one flew straight out of the hawthorn thicket and landed on me; just as I was contorting myself to frame it with the macro, it lifted, landed very briefly on the lens hood, and then took off again and disappeared back into the trees. And to cap the frustrations, just as I was heading back to the car a Clouded Yellow suddenly appeared, flew past me at speed, allowed itself to be chased for about a hundred yards, and then came down in some tall grass, where I totally failed to find it despite its vivid colouring. So I doff my cap in thanks to the Migrant Hawker, for having been the most cooperative invertebrate in the reserve.