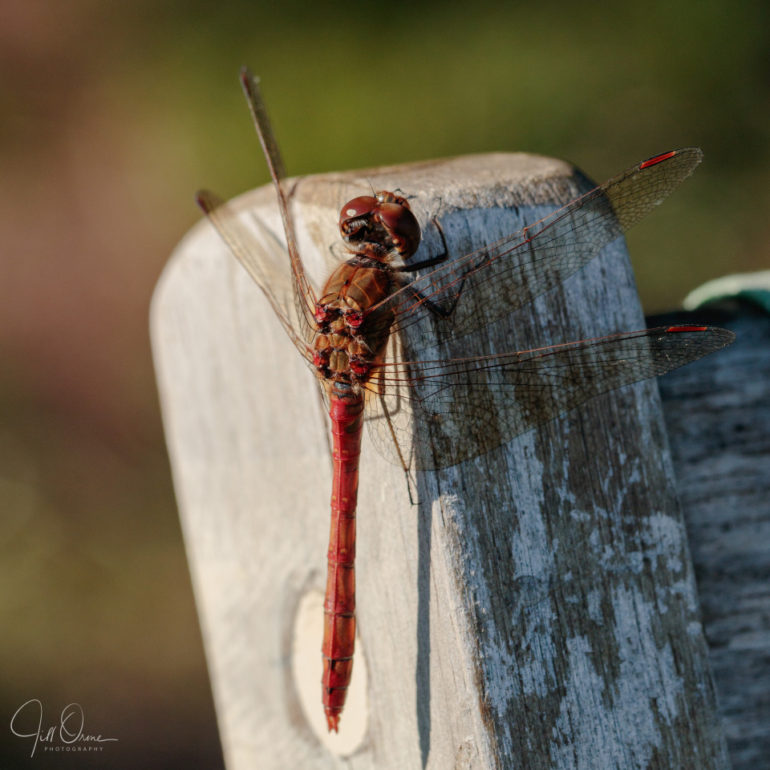 I spent this afternoon at Croome, just because it felt like too long since I was last there. I hadn’t been planning to blip another Common Darter so soon after the one I posted on Sunday, but out of all the things I photographed today – a Comma, a couple of third brood Small Coppers, Ruddy and Common Darters, and a Migrant Hawker – this is the photo I like best.

If I’d had a wide lens with me, as well as the 100-400 and the macro, I’d be able to give you the context shot of three deckchairs drawn up side by side, with a couple of humans in the other two (one of whom was gesturing frantically towards this dragon as I walked towards them, not realising that I’d already seen him in flight, beautifully back lit, as he was selecting this perch). But I think it works on its own, allowing me to feature the strong, low light rather than having to try to flatten it; I hope that you agree.

We had a Show & Tell at BGCC this evening – a kind of “What I did in my holidays” affair – and I found myself showing six nature images (three dragons, two birds and a moth), and telling the assembled witnesses that I’m perhaps beginning to think about possibly forming the plan of maybe starting to work on an Odonata ‘A’ panel…. Not only did nobody flinch or splutter, but I was really pleased that the only FRPS in the room was very positive about two of the dragon images, and I came away feeling quite encouraged.

And now I’ve told you too. So maybe it’s game on.