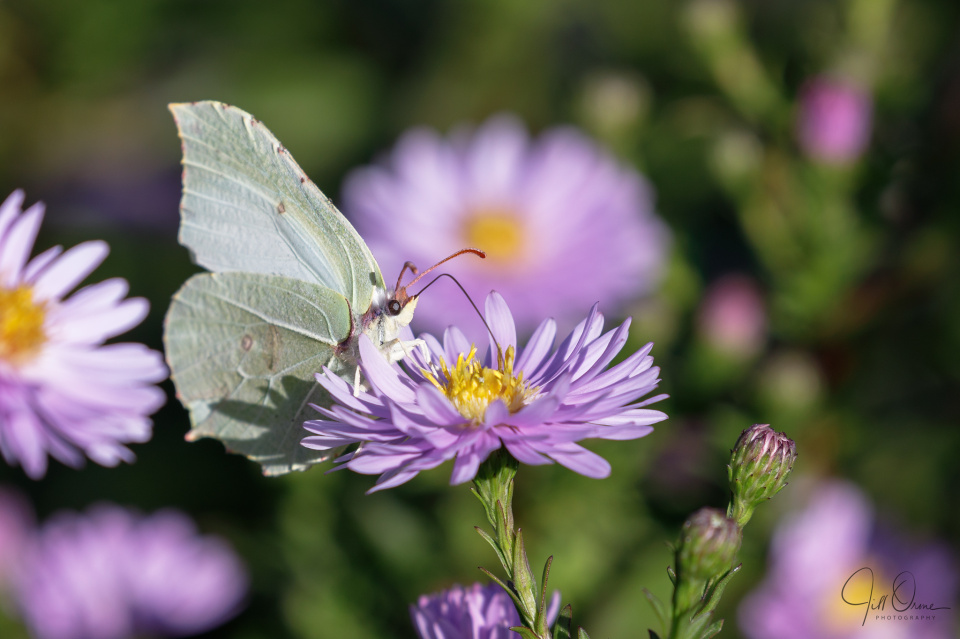 I’ve been gadding about recently – too many trips out, too many photos taken, and not enough sorted, culled and processed; so I gave myself a relatively lazy day today and tried to catch up a little. As well as clearing out a few photo folders and doing some general admin, I took half an hour to set up an account at Picfair – more in hope than in expectation, but you’ve got to be in it to win it, right? I should also have prepared a competition entry, a to-do item which is currently passing through urgent and is well en route to festering, but at this point I decided that I just didn’t care enough, and went for a walk instead.

The village was humming with flies and bees, but none of them appealed, so I kept walking until I reached an enormous self-seeded clump of Michaelmas daisies in the top corner of the butterfly field, which was absolutely seething with nectar feeders of various kinds, including two very fresh Brimstones. I love Brimstones for their mad purple eyes and pink antennae, and the pink and purple accents in their fur – such an odd contrast with their wings, which are designed to look like leaves, and which in flatter light than this allow them to blend surprisingly well into the background foliage as they go about their business. Today’s light was punishing, and made it hard for me to judge the colour of the butterflies; males are generally a fairly clear green colour, and these ones looked pale enough to be females, but they were beating each other up at intervals in a very masculine way, so I think it’s possible that their colour was simply being bleached out by the strong sunshine. There’s a more descriptive, macro photo of this individual here, if you’d like to see it, but I prefer this artier long lens shot.

Brimstones are among a very small group of butterflies that hibernate as adults, and today’s pair will concentrate on feeding over the next few weeks, to lay down as much fat as possible to get them through the winter. As the temperature drops they will look for a sheltered spot, probably in a hedgerow, and will sleep there until next spring. Male Brimstones emerge before females, and are usually one of the first butterflies to be seen in the spring, patrolling the hedgerows in search of a mate. At that time of year they’re so fast and restless that I find them almost impossible to photograph, but they become easier to catch up with round about May, when they’ve mated and calmed down a little. Given reasonable weather, and if it escapes predation, this butterfly could survive right through to the late summer of next year.