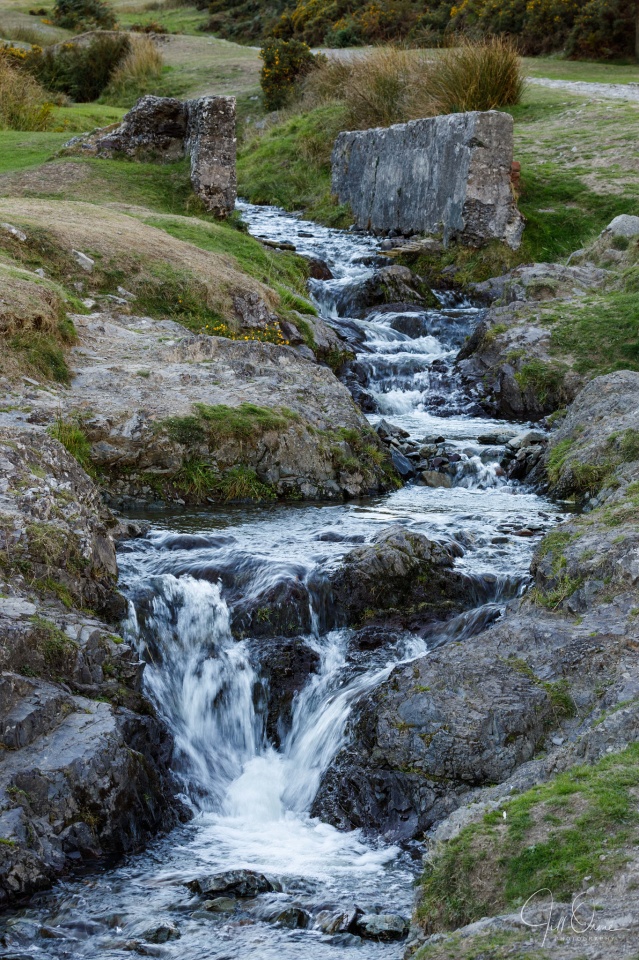 I’m calling this image Making the Best of a Frustrating Day.

I drove to Shropshire this morning to look for Golden-ringed Dragonflies in Carding Mill Valley, but the only ones I think I saw were a distant shimmer of spotlit wings against the fern and gorse high up on the hillside: not a single one visited any of the pools during the time that I sat quietly waiting for them. Lest you should feel sorry for me though, I must say at this point that sitting by those pools was a lovely, almost meditative experience, with the warm sunlight dappling the surface of the water, and brown trout swimming lazily around and occasionally rising to take a fly.

I almost came within range of a much smaller dragon (which still set my pulse racing, because I know that there are Black Darters in the area), but it was put to flight by the kind of couple one can only hope never to get as next door neighbours, who deliberately walked a pack of five dogs straight across the piece of grass on which I was focusing my trembling lens. Needless to say, I didn’t see it again.

Speaking of my trembling lens though, once I’d decided that if I was going to take any photos today they would need to be of water, I was pretty impressed to find that I could use the 100-400 hand-held down to 1/30 second (even extended for some of the shots I took), and still achieve acceptably sharp results. If you’re a proper landscape photographer, I expect the word “tripod” has gone through your mind by now – but no, I didn’t have either filters or tripod with me, because I hadn’t planned to do that kind of photography. Did I mention that I was hunting dragons?

On another day I’d like to persuade R to come to Carding Mill Valley with me, because it’s a wonderful place (even in the absence of dragons). There is a quite famous waterfall, called the Lightspout, which I think would be worth visiting; I walked about half way to it today, but it was late in the afternoon and there weren’t many people about, and despite the assertion on various web sites that this is an easy ascent, there are places where it’s actually a slightly tricky scramble over scree and uneven rocks, and I was concerned about falling with no-one around to catch me. So I turned back and went down the valley again to get a final cup of tea before starting the drive home; this view back up in the direction of the Lightspout was taken just a little way above the car park.