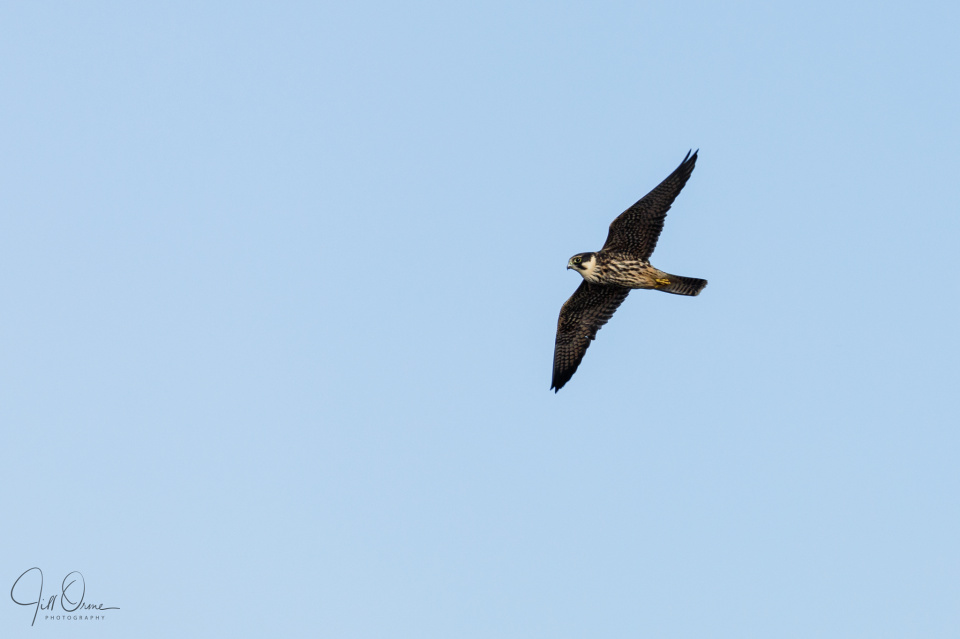 My hobby is chasing around after wildlife and trying to get better at photographing it. Some days are more successful than others, and today counts as a good one because I managed to capture this hobby, hunting dragonflies over Napton Reservoir. It’s not the best photo I’ve ever taken – or even the best photo I took today – but it has to be my blip because it’s the first time I’ve ever managed to get a lens on one of these small, fast raptors. In fact, the only time I’ve ever previously seen one was at Upton Warren, where the summer-resident male has an unfortunate habit of diving through my photos in a blur of wing and talon, and making off with the dragonfly I was in the middle of photographing. Catching this one’s high-speed stoop towards the reeds where the hunted were themselves hunting was beyond me today (though I’ll happily keep working on it!), but I did get some shots of it flying away with its prey held casually in one claw, and then dismantling and eating it on the wing; the sequence is here, if you’d like to see it.

The Eurasian hobby is about the size of a kestrel, but is very fast and capable of high-speed aerial manoeuvring. It easily captures dragonflies – themselves master aerialists – in flight, but it’s also capable of catching bats and small birds, including swallows, swifts, and martins. In the UK it’s a summer visitor, usually breeding in an abandoned corvid nest in a tree with good sight lines in all directions, and is a Schedule 1 species, meaning that neither the bird nor its nest can be approached by anyone without an appropriate licence. In the autumn it migrates southwards to winter in sub-Saharan Africa, returning north in April or May.

Other highlights of my afternoon at Napton were a second grey phalarope (far more distant than the one at Charlecote, and zipping about in contrasty light that made me appreciate Saturday’s flat greyness), a little egret that flew in and then back out again, and many, many dragons. But the hobby was definitely the star of the show, and a very welcome addition to my “first-timers” list.