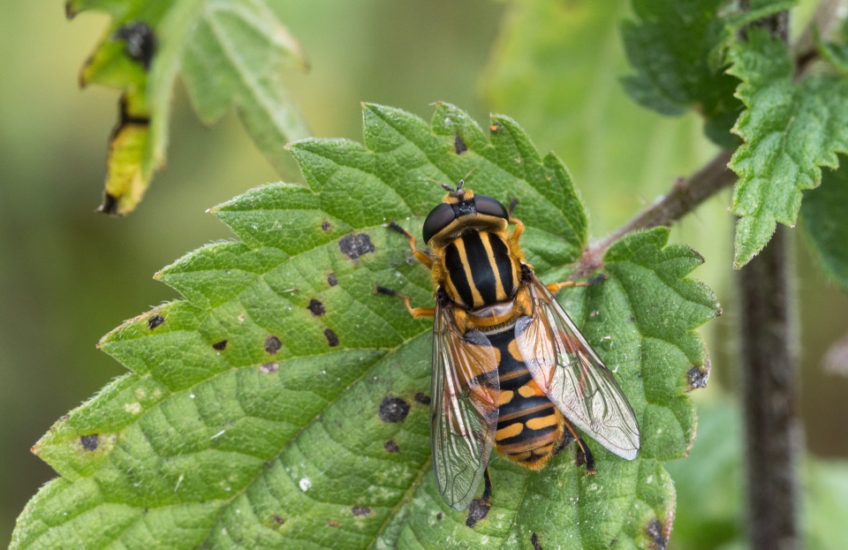 No-one who has ever met me would describe me as a style maven – in fact I live in daily expectation of receiving a written warning from the MX-5 about my poor standard of presentation – but I’m going to go out on a limb here and state that vertical and horizontal stripes should never be worn together. Certainly, those of us who tend to the classic English pear shape shouldn’t wear this particular combination, with the vertical upper stripes thinning the torso while the horizontal ones below seem to enlarge the hips. Just saying.

When R saw this photo he said “It looks like a football strip!” – and he’s not the first person to think so, because one of the common names of this hoverfly is the Footballer. Its scientific name is Helophilus pendulus (which according to Wikipedia means ‘dangling marsh lover’ – though somehow that looks wrong to me), and having done a bit of image searching and discovered that the soccer team that plays in black and orange stripes is Hull City, I did spend about half a second working up a pun along the lines of Hullophilus… but then decided that I really couldn’t be bothered, and you’d probably rather I didn’t in any case. By the way, it’s also called the Sunfly because it prefers to come out on bright sunny days – though today was far from being one of those, and this female was having to keep dry by lurking under some nettle leaves.

Many thanks for the kind words, stars and hearts you gave to yesterday’s Skipper – I’m jolly grateful, especially that so many of you have managed to resist unfollowing this journal despite the almost endless stream of pointless witter that flows from it.

I’ll refrain from writing another screed here – I seem to have exhausted even myself – but I can’t resist sharing the fact that by this morning someone had brilliantly converted Cameron’s “tiddly-om-pom-right” hum of yesterday into an Evil Tory Theme Tune. If Theresa walks on stage to this at the next Party Conference, I’ll be able to die happy.

Other things that entertained me today:
Michael Portillo’s demolition of David Cameron.
The LibDems’ 404 message.

Oh – and the fact that one of my shots from last summer has made it into next year’s Worcestershire Wildlife Trust calendar – not as one of the big photos, but as an “extra” for July. All the extras are in an album on Flickr; the twelve winners have also been chosen, but won’t be revealed publicly till next week. So that was nice!