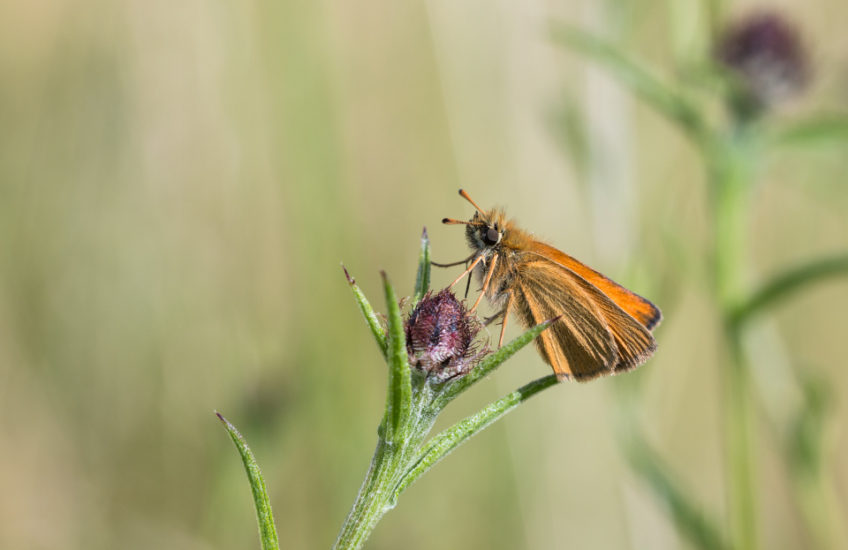 Yes, I know – it’s another Essex Skipper… but what could I do when it posed so nicely? I bungled the killer shot, which was when it spiralled up its ridiculously long proboscis – I caught the moment, but the focus was slightly off – but then it sat on this knapweed, patiently waiting for me to remove myself and the camera, and I had all the time I needed to get into a position that gave good background separation. So there we are – I hope you like it.

I was lucky to capture some reasonable photos on a rather late and consequently brisk bug safari this afternoon, after I’d spent much of the day haunting the news channels. It was, after all, a pretty momentous day, with Cameron handing in his cards to to Maj, and she then offering the Top Job to Theresa May. She’d reportedly been a bit grumpy about having to cut short her hols to deal with all of this, and I do wonder what she said to Cameron during their chat; but the official photos of her with Theresa show the two of them positively grinning at each other, so I think we can assume that she’s relieved a grown-up is now in charge of the toy box.

And that Theresa! She’s a player, I’ll give her that. Having timed her arrival at Downing Street perfectly to make the Six, she delivered a really quite astonishing speech – for a Tory – in which she pledged to have more of a thought for those who are struggling than for the rich and powerful. It will make a pleasant change if it happens, I must say.

As expected, her first move was to sack George Osborne and give the job of Chancellor to her chum Philip Hammond – but she then proceeded to make a series of quite jaw-dropping appointments:

So in effect, by 8pm this evening she had created a human shield of Brexiteers around herself, and tasked some of the biggest Eurosceptic troublemakers with sorting out the mess and making a post-EU Britain work.

Except that Twitter, as you would expect, is in meltdown over Boris – and I can’t say I blame it. Here is some of the reaction. And here is some more.

Oh, and our new Home Secretary is Amber Rudd, who was once Aristocracy Co-ordinator on the film Four Weddings and a Funeral. Director Richard Curtis said he gave Ms Rudd the job of casting extras for the movie, because: “She knew a lot of dukes and earls.” So that’s good then.

I can hardly wait to see what jolly japes Theresa gets up to tomorrow.