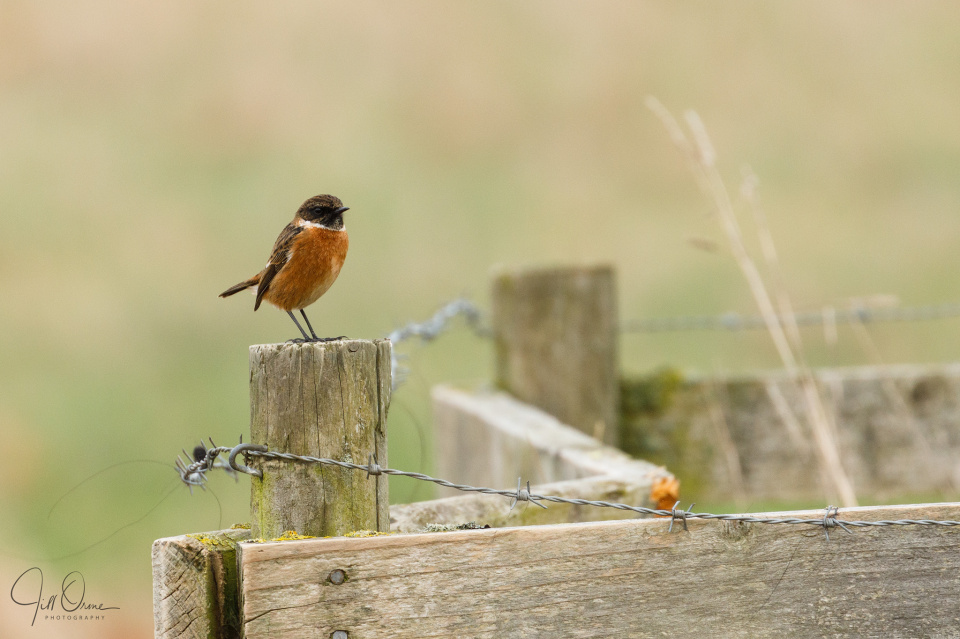 I went back to Croome this afternoon in search of hawfinches, and though I didn’t find any I did have an enjoyable walk around the whole of the artificial watercourse – a good 10,000 steps. On another day I would probably have posted some of the wigeon which were grazing a field by the river, and which took to the water for just long enough to let me walk by them before returning to their foraging; but today they’re relegated to my Facebook page.

I was stomping (tiredly, if that’s a word) back along the east side of the river towards the house and shrubbery, when a small bird flew boldly into a nearby shrub. I assumed from the size and demeanour that it must be a robin, but I was looking into the light, so I had to take its photo and check the back of the camera in order to see it well enough to identify it – when it turned out to be a stonechat. It then flew to this tree guard, and by moving fairly slowly I was able to get close enough to take a series of photos.

The stonechat is a restless bird, both in its personal habits – it’s flighty, and rarely stays still for long – and as a species. In the UK it tends to breed in coastal areas or on lowland heath, but in winter it spreads further inland; some British birds are thought to migrate to southern Europe to see out the winter, while some birds from northern Europe winter in the UK. It’s primarily an insectivore, though it will also take seeds and berries, and because of this it suffers in areas of intensive agriculture where pesticides are used. The tenant farmer at Croome is working with the National Trust to improve the quality of the soil and the biodiversity of the estate, and this may explain the fact that stonechats seem to have moved in: I’ve seen several of them around the estate over the course of this winter.

This is a male bird, but if he’s resident there would probably have been a female quite close by, because breeding pairs tend to stay together through the year. Females are similar to males, but browner and more streaky. Its alarm call is said to sound like a couple of pebbles knocking together, and I think that’s why it’s called a stonechat.