I only have some garden birds and a saturated pulsatilla today, and I’m featuring the long-tailed tit because it’s R’s favourite – but for clear evidence of what the day was like I refer you to the extra. We’ve been promised that next week will be warm; I’ll believe that if it happens, but if it does I think the entire country will be enveloped in a cloud of steam as the soggy land dries out. 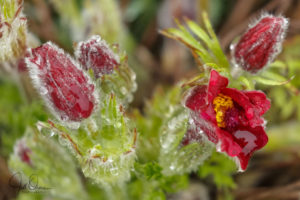 As well as being wet, today was bitterly cold – the thermometer on the back wall of the house said 9°, but it didn’t feel like that even inside, let alone out in the garden. I was only out for about ten minutes (heavily layered), which was long enough for some small birds to decide to take a chance on me being benign and get on with feeding; having grabbed my photos I scuttled back indoors, and shivered violently for about the next hour.

It continues to surprise me that these tiny creatures manage to survive at all in these conditions – I know that long-tailed tits, and I would assume many other small birds, need to be able to roost in a group to pool their body heat, so I guess this one is part of the small flock that I quite often see around the village – but it’s bolder than the others, and frequently makes foraging raids into our garden alone. As you can see here, it was heading towards the fat balls, which will have provided it with a valuable energy boost.