He was lifting away from the ground after a low pass that had netted him nothing. But the extra shows the same owl with a sizeable vole, and that photo was taken only four minutes earlier, so he must either have scoffed it at high speed, or stashed it for later. Stashing is a little risky though, because this field is full of sharp eyes looking out for an easy meal: as well as the other owls there are kestrels and corvids (including a raven), and some stoats too, all of which would make off with someone else’s dinner without a second’s hesitation. 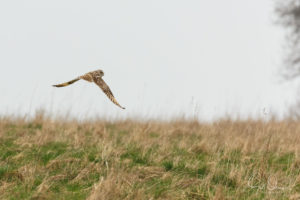 I’ve said “he” as though I know that this is a male; really I don’t, but I was told today by someone far more knowledgeable than I am that (although it’s not a completely reliable indicator) generally the males are paler than the females. Working on that assumption, earlier in the afternoon I caught some very distant shots of a different male trying to mug a female for a vole she’d caught; he was pretty determined, and she was hampered by the vole, but she managed to hang on to it and eventually to land, at which point he gave up and went after a meal of his own. The photos aren’t great, because they’re cropped to within an inch of their lives, but they are quite interesting in showing this behaviour, and if you’d like to see them they’re here.